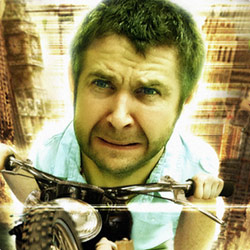 Star of 8 Out Of 10 Cats, The Friday Night Project and Spoons, Rob's triumphant return to Edinburgh last year won him fantastic critical acclaim. A sell-out festival run took his trademark comedic storytelling to a career high, followed by a national tour. This year Rob is knuckling down. Girlfriend, toddler, dog? Check! However, you can't live off high spirits and adrenaline forever, the honeymoon's over. Now the hard bit; sorting himself out. 'Hilarious' ***** (List); 'Missing this show means missing something wonderful' ***** (Edinburgh Evening News). 'Just go see it' **** (Sunday Times).

Rob Rouse's return to Edinburgh last year won him much critical acclaim and a sell-out run in one of the primetime slots of the festival. This year, Rob explores the ego, time and escaping the traps life inevitably throws at us. Expect stand up, expect sketches, expect characters... expect hilarity.

Rob's career in comedy was kick-started in 1998 when he won the So You Think You're Funny? New Act Competition, following the likes of Peter Kay, Tommy Tiernan and Dylan Moran. A couple of sketch and solo shows at the Fringe later and Rob could be seen on countless television shows from 8 Out of 10 Cats to Spoons, as well as a co-hosting slot on Channel 4's The Friday Night Project. His film spoofs with his pet duck became an internet phenomenon and were even 'pecked' up by Paramount.

Following the success of last year's fringe, Rob was invited out to the Copenhagen Comedy Festival (where he is set to perform again this year) and is touring his 2009 show My Family and the Dog That Scared Jesus nationwide as well as in the middle-east. He has been a regular guest on Chris Addison's Five Live topical show 7 Day Sunday, has recently recorded his third Live at the Comedy Store for Comedy Central and has just made a pilot panel show for ITV. Rob is currently working on a project with television production company Baby Cow, the force behind Gavin and Stacey and The Mighty Boosh, so watch this space!