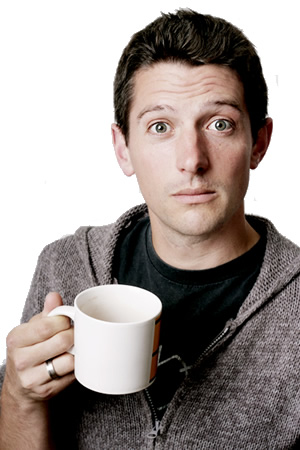 This is not a unique observation, but it just has to be said because never has a truer word been spoken: Stuart Goldsmith is just so damn charming and nice. You just can't help but like the guy. Seriously, even if he kicked your kid in the head you'd probably still want to be his friend.

Goldsmith says he's a "deeply boring man" at heart, and tries to prove this by revealing some of his nerdy tendencies during the hour, from the scarily efficient way he tidies his house to the sensible shoes he opts to wear.

However, Goldsmith is anything but boring: he has a background much more exciting and interesting than his conventional clean-cut appearance reveals.

His opening routines are very funny indeed. Following very solid and well-written material about R&B, posh people and goths, Goldsmith finally explains what his interesting background is: since a young age he has been touring Europe as a street performer, something he has only recently given up to make way for his burgeoning stand-up career. Yes, this 'boring' man can juggle chainsaws and play with fire. There's some great material in this section of the show too - including the story of how he did indeed kick a kid in the head, albeit accidently.

Perhaps the only ill-judged part of the hour is the final section in which Goldsmith again proves himself to be anything but boring by recounting some rather saucy and unconventional bedroom tales. It's nothing too sexually explicit, but at this point he noticeably lost a couple of the less broad-minded members of the audience who, until that point, had been laughing along with his more general mainstream fun.

This was such an assured and confident hour of well-written comedy I had to go and double-check this was indeed Goldsmith's Edinburgh debut show. It's an immensely impressive start and gives me no hestitation in suggesting you should definitely seek him out at the Fringe next year. Fingers crossed he won't be balancing stuff on his head on the Royal Mile, but will instead be making audiences laugh with his gift for stand-up.