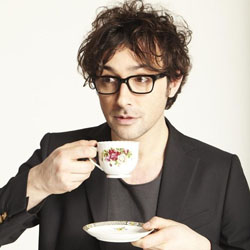 Star of Channel 4's Rude Tube and Balls of Steel and So You Think You're Funny finalist 1999, brings his brand new stand-up show to the Fringe.

Star of Channel 4's Rude Tube and Balls of Steel, and So You Think You're Funny? Finalist, Alex Zane returns to the Fringe and his stand-up roots with this highly anticipated brand new show.

He's come a long way from a childhood spent dressing like Columbo, he'll probably tell you about meeting Burt Reynolds, how to avoid witch hangings, his time at medical school and the day James Bond compared him to a plate. There'll be other things too.

Alex currently hosts Alex Zane's Guest List, which returns to Sky Movies for a fourth series from 3rd June 2010. He is also the regular film columnist for The Sun and presents a weekly show on NME Radio.

His extensive TV credits include Screenplay and TRL (MTV), Bill Bailey's Bird Watching Bonanza (Sky1), T4's Popworld, Orange Unsigned Act, Rude Tube, Balls of Steel and 8 Out Of 10 Cats (Channel 4). Alex was a presenter on Xfm London from 2003 and hosted the breakfast show for two years. His writing credits include The Eleven O'Clock Show (C4), Brain Candy (BBC3), and The Sketch Show (ITV1).S