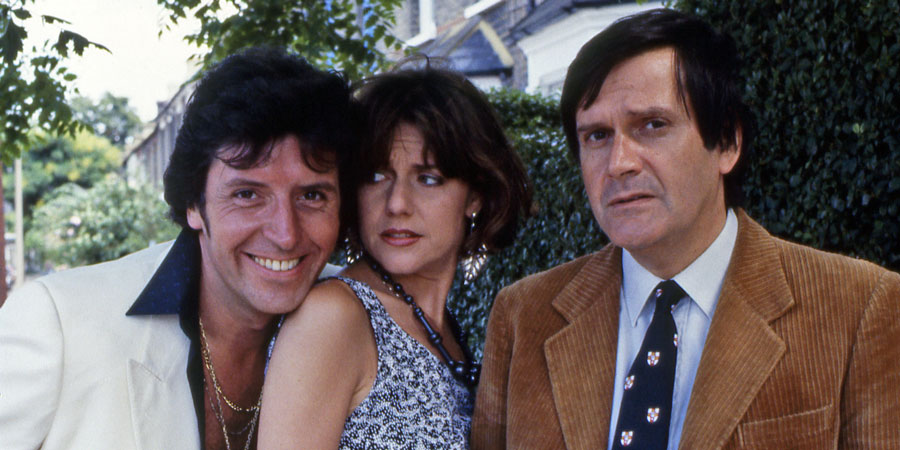 I loved this show too.

Aaron what is the point of this great site if we can't make them repeat much loved programmes like this one?

Surely you must have some say in TV schedules by now!?

I reckon this will never get repeated because TV is shit. However, you can watch the first series and the Christmas special on YouTube

Anyone remember the episode with the flatulent dinner party host?

The "that one's on me" line from Kirk made me laugh more than anything else I'd ever seen when I was a youngster.

I reckon this will never get repeated because TV is shit. However, you can watch the first series and the Christmas special on YouTube


Cheers Sebastian.
I may watch an episode tonight.

So shoot me! Although I enjoyed the original 'Dear John...' with the late great Ralph Bates - I much preferred the US version with Judd Hirsch and the hilarious Louise (Jane Carr), the sex obsessed British woman who was the leader of the One Two One Club. Great comedy - but there again it just goes to show how great a writer John Sullivan is. His work (Dear John... in particular) adapts so well. I would like to have seen a version of 'Only Fools and Horses' - something like Sandford and Son; the US version of Steptoe and Son. Alas not to be!

Have never seen it, looks like I'm missing out.

I did enjoy the US version as well.
Judd Hirsch was perfect casting.
But the UK Ralph was much better than the American one.

You have BF, both versions.

I never saw the British version, but I loved the US version. It was about the time that I was allowed to stay up late to watch 'grown up' TV, so I thought Kirk was the funniest thing ever. Not sure who the actor was but he had a really pointy chin and curly blonde hair. Might have been my first crush?

The American one was too 'shiny' for such a downbeat comedy. The British one is still probably my all-time favourite sitcom.

A friend of mine watched it for the first time recently and said all the characters were 'caricatures'- then went on to extol the virtues of Spaced, Peep show and The Office, all of which ARE brilliant, but are full of caricatures of the most obvious kind! He's evidently too young to realise that some people in the 1980s were genuinely like that. Ironically the show was the forefather of all the 'dark' and 'edgy' comedies people like today, but most of them have probably never heard of it.

Kevin Lloyd's character was called Ricky Fortune, by the way. I was going to be Kirk St Moritz on this forum but I plumped for Badvoc because I was bearded when I joined.

Kirk: "I remember the first night Lola and I spent together, she whispered, 'be gentle with me, Kirkie.'"

Ralph: "Be gentle with her what?"

Series 2 was a bit chaotic, with people leaving and rejoining the cast every five minutes and Sullivan clearly struggling to keep up, but the Christmas special was brilliant.

Wow.. I remember my parents watching this, my mother in particular...

Suddenly I don't feel like such a young man anymore!

Ralph was a great character - Peter Denyer was in "Please Sir!" too.

Wow.. I remember my parents watching this, my mother in particular...

Suddenly I don't feel like such a young man anymore!

Ralph was a great character - Peter Denyer was in "Please Sir!" too.


and that sitcom with Maureen Lipman 'Agony'. Think Peter Blake was in that as well not sure. John Sullivan obviously remembered Rachel Bell from the OFAH episode To Hull And Back

Yes, he was. Not Agony Again though.

Undecided whether to buy the DVD boxset of this. Have never ever seen the series before.