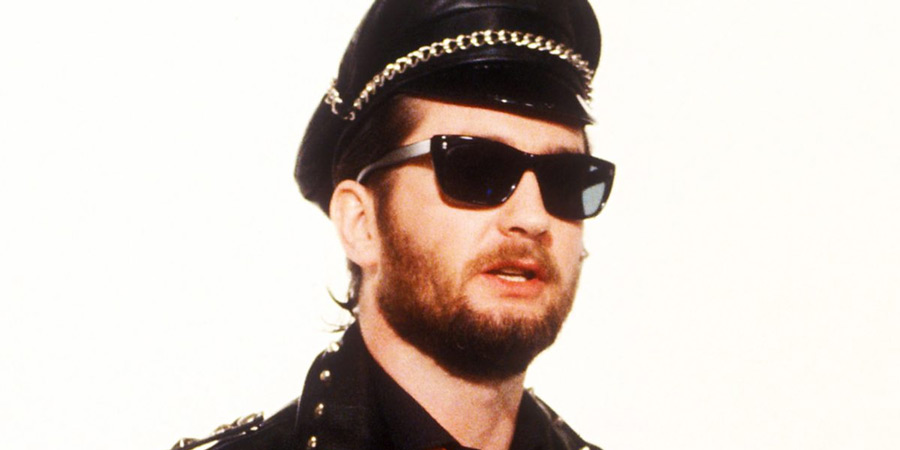 It was a shame that he died so young.

Doesn't matter how many times I see it, it still makes me giggle.

Top link! I watched some more. Well under rated comedian in my opinion.

I was a huge fan of Kenny Everett during the 80s. I think he was the funniest thing on tv during the early 80s era. Sadly though, I haven't ever seen any of his shows since for about 25 years. Do they hold up today?

Having not been born in the early 80s I can't provide a definitive answer. But I really love them, seeing for the first time now.

I'm approaching fifty. But my parents, for no particular reason, never got around to buying a television, so I can watch re-runs of elderly programmes without the pre-conceptions or the sense of nostalgia: I saw essentially no TV as a child, other than small amounts at grandparents or in friends' houses, until I went to university in 1983, and didn't have a TV that I controlled until sometime around 1987.

Sometimes, programmes of the 1970s are absolutely brilliant and would be perfect even if made fresh today. Morecambe and Wise. Dad's Army. Fawlty Towers. Morecambe and Wise. Morecambe and Wise. Sometimes they're charming period pieces, but without the affection of having seen them at the time their age is rather apparent. Monty Python. The Good Life. It Ain't Half Hot Mum. The main problem when seen "cold" today is that the pacing is often slow, but the quality shines through nonetheless. Sometimes they're dated beyond repair, but you can see why they were seen as good at the time. Some Mothers Do 'Ave 'Em, perhaps.

But sometimes, the reputation is absolutely incomprehensible. I'm sat watching an alleged "best of" Kenny Everett on BBC Four. It's been on for 24 minutes, and I've not smiled once, let alone laughed. Why was this stuff made? Why was it funny then? Why, please, God, is it being shown now?

No one's mentioned the video effects on this show-Quintel-the most famous being the star wipe. Dated now of course.

No one's mentioned the video effects on this show-Quintel-the most famous being the star wipe. Dated now of course.


No wonder no one referred to Quintel...

Watched the best of the other night, time has not been kind to this show, very eighties but with a certain nostalgic charm for those who were there. I also caught his film 'Bloodbath at the House of Death' the other day, terrible, but enjoyed it in an "it's so bad it's good" way; and of course there is the pleasure of seeing a number of British comedy stars doing anything for the money, Barry Cryer, Pamela Stephenson, Don Warrington, Gareth Hunt etc.


But sometimes, the reputation is absolutely incomprehensible. I'm sat watching an alleged "best of" Kenny Everett on BBC Four. It's been on for 24 minutes, and I've not smiled once, let alone laughed. Why was this stuff made? Why was it funny then? Why, please, God, is it being shown now?


I'm mystified. After all, it was all done in the best possible taste.

I'll get me coat.

(Never liked that clown fellow who drew lines on the screen, but Sid Snot and Gizzard Puke were superb.)

Kenny was only ever funny when his show was being broadcast and made by Thames at Teddington Studios, as the only other people on the sound stage were the crew, and for Kenny, less was definitely more. With only half a dozen naked voices echoing round that huge sound stage, it made you feel like you were there, as laughter is infectious, and those few voices made it a tad intimate. When he ended up at the Beeb, they insisted on a full audience.... and it just wasn't the same anymore. With hundreds of audience members all laughing away, you felt like just another face in the crowd. Kind of like when any underground source of entertainment comes under the mainstream spotlight.... the upper classes don't get it, and as they have the money and power, they foist their way of doing things onto whatever comes their way, and in doing so, they kill the original spirit... a good example of which was in Wayne's World, taking it out of the basement and putting it into a studio, then having a corporate sponsor... suddenly the free range goofing around morons have an official image to maintain. Bummer

I used to enjoy this when I was very young, but haven't watched it since it was on air. May have to catch up and see if it stands the test of time.

I've been living in Australia for a while now. What a blast from the past, Kenny Everett. He really was a hard working entertainer, understated in his time. I made a video for the launch of King Kong the Stage play Melbourne and someone liked me to Kenny......tell me?
This is how it went.........................