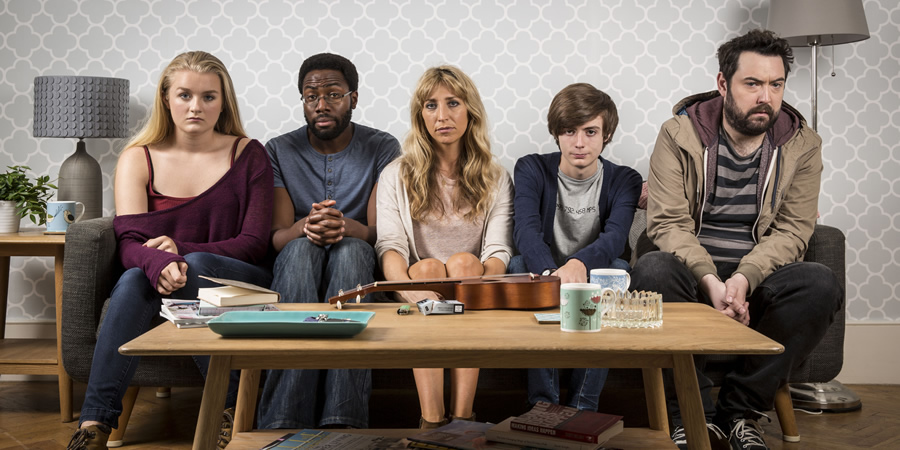 Think this will be good. I watched the C4 pilot on 4OD a while ago and thought it was funny. I like Nick Helm. Not sure if it will be exactly the same now it's been picked up by the Beeb? Trailer looked good so will definitely be tuning in.... well, recording it and watching it whenever the hell I like, at least.

I thought that was brilliant. Jolly good acting all round.
Nick Helm is no longer just 'that bloke who shouts a lot'.

Nick Helm will always be known as shouty man to me. I enjoyed it until the musical number. Songs in sitcoms seem to be in vogue at the moment and if you're going to do it I think the song needs to be head and shoulders above the rest, and this wasn't. Enjoyed the show as a whole.

I didn't hate it but it didn't make me laugh.

Kept my attention/interest. Don't know Nick Helm. Felt like I was watching a more depressed, bitter (and slimmer) Nick Frost, playing against a nicer version of the kid from Spy, which made it feel a tad contrived.

Agree that the song was a mistake.

All in all though, could be a grower.

I didn't hate it but it didn't make me laugh.


What recent shows have you found funny, Lee? Or if nothing recent, then going back a while? Toast would be mine[/i].

What recent shows have you found funny, Lee? Or if nothing recent, then going back a while? Toast would be mine[/i].

For me the best recent shows would have to be Toast and Plebs.


Ta! Missed that one. Will check it out when it shows up on Virgin catch-up.

I never realised I was so influential! But you're welcome, and I like it because it's silly, so expect silly.

I never realised I was so influential! But you're welcome, and I like it because it's silly, so expect silly.

Silly is good! Will be wearing my crazy comedy cap while I watch it.

I really enjoyed this. The "Gwen" number was fun and I feel Elliot's portrayal of Errol was spot on with the pre-teen angst kids today have to deal with.

The premise is very similar to the Oscar-winning live action short film, "Curfew", from 2012:

"Richie is in the process of ending his life in a bathtub, when he gets a call from his estranged sister, Maggie, asking him to look after his niece, Sophia, for the night. Richie cancels his plans and sets out to babysit his niece..."

That said, it's probably a case of parallel lines development.

I thought UNCLE was good, though. Sharply written, lots of heart.

I wasn't a huge fan of Nick Helm having only seen his TV panel show type appearances but I quite enjoyed this.

Plus, it's got Daisy Haggard in it, probably the only woman I'd climb over Victoria Coren for