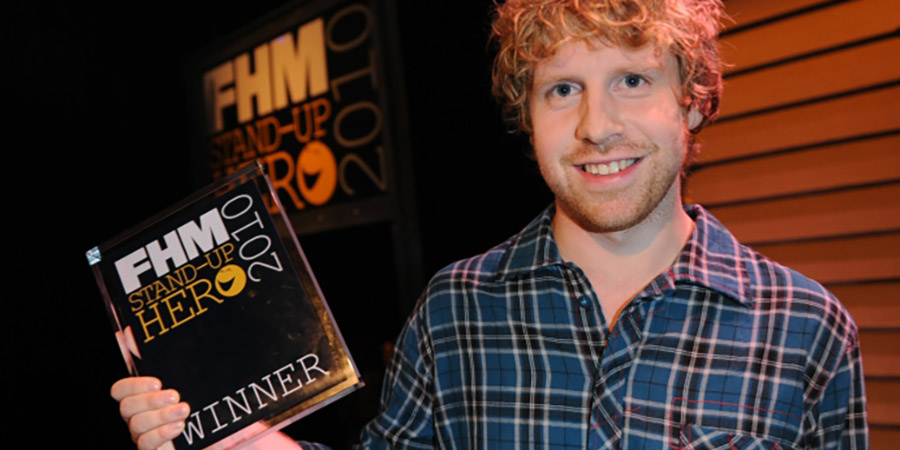 I thought this was a great little show. Interesting to see the contrasts in styles and delivery, how some died and some wowed the audience and to get the take of the likes of Ed Byrne, Jason Manford and co on the whole thing.

I was amazed that it was a one-off. An hour long show, during whcih they mentioned that they started off with 432 acts and we were going to see the final eight. never mind skating on shite or celebrity gospel singers on acid, rthis would have made a really good, funny, interesting show over say a six week, once a week run.

Instead they crammed it all into at tops, 50 minutes including ad breaks. Baby Cow, what were you thinking? I'd happily have watched this show in the format described above. A new talent show for stand ups. At least it's not contrived. No ice rinks, no sequins, no camp drama queen judges, just varying degrees of comedic talent.

Why was it a one off?

Because watching them on TV would have been even more painful than watching them in a live environment. They'd have shed viewers faster than a particularly ferocious eczema sufferer loses skin, and advertising money accordingly. The other stand ups were voted out for a reason. I do wish that they'd have been able to get more from it, but I totally understand and accept that they can't.

The guy in the duffel coat who didn't get through was very good. The guy who won, I don't even remember him, let alone his act.

I liked the duffel coat man too. My favourites who got through ended up coming 2nd and 3rd, so I think they chose quite well really.

Would people have deserted ship so quick though? Shows like X Factor, Britain's got Talent and American idol seem to thrive on the cringeworthiness of some of their auditionees. Maybe stand up is too niche for people who like dog jugglers, singing grannies and men who hang large weights from their testes whilst ably accompanied by a tubby girl in a sequined leotard.

If they were to string it out though, I'm pretty sure it would be just us stupidly hardcore comedy geeks watching by the second episode, let alone the third. There weren't even any nearly-naked girls to satisfy the normal FHM readership.

I felt sorry for the Scottish lady, I thought it was a bit cruel to show her dying up there. I know all publicity is good publicity, but still... She can't have been happy with that footage going out. As said previously, the crowd did seem quite tough.

It was interesting to see the established acts' feedback, but I wondered if the newbies had given their consent to that being aired?

Consent would have been written into whatever contract/terms they signed/agreed to in entering the competition in the first place.

Surely there must be a 'If I'm shit, don't show it' get-out clause?

Then everyone would use it and they'd have next to no programme!

I was on TV a few yrs ago (I played pro-poker for a while and was filmed in a couple of games)....had to sign away any right pretty much - no matter how bad/good you looked once they had edited the thing the way they wanted.

This was a one-off? I was thinking of entering next year.

'One-off' as in 'not a TV series', not a single never-to-be-repeated contest. I'm sure it'll return next year.

FHM were talking about this in Oct 09 so I expect you'll hear off heats (if it runs this yr) at the back end of the summer.

I thought this was a great little show. I was amazed that it was a one-off. This would have made a really good, funny, interesting show over say a six week, once a week run. Why was it a one off?


I enjoyed it too - although felt a bit sorry for all the contestants, as some of the audiences clearly weren't the best for encouraging new acts.

As for why it was a one-off... I actually agree, and think it would have worked well as a series. Aaron says that it would have lost viewers if it was a longer show but, as this was on ITV4, would that matter?!? Even if they only managed to get 10 viewers to hang on to the end that'd probably be more than watch the 1000th repeat of Inspector Morse or whatever.

The simple reason why it was a one-off is no doubt money. They could only afford to film the quarter finals and the final by the looks of things, and only pay Ed Byrne to attend the final (plus for all the other cost reasons - editing etc is really expensive for starters)

This was a one-off? I was thinking of entering next year.


I think the contest is coming back... although obviously following the Jongleurs financial problems news that has surfaced since this this last contest, FHM are going to need to find a new backer.

(For anyone that missed the TV programme, it's repeated this Saturday at 10pm)

Personally I think the competition was a bit flawed. We weren't introduced as new acts, just thrust up on the stage in front of a paying audience.

I think if they'd done it like the Laughing Horse comp, where audiences are encouraging the new acts to do well, it would be great TV. They've only paid a couple of quid, so are willing them on. Jongleurs crowds want their money's worth.

It's not a bad idea to film the trials for an open mic competition, and I've seen enough talent to know it would make a good show, but Jongleurs isn't the place for it.