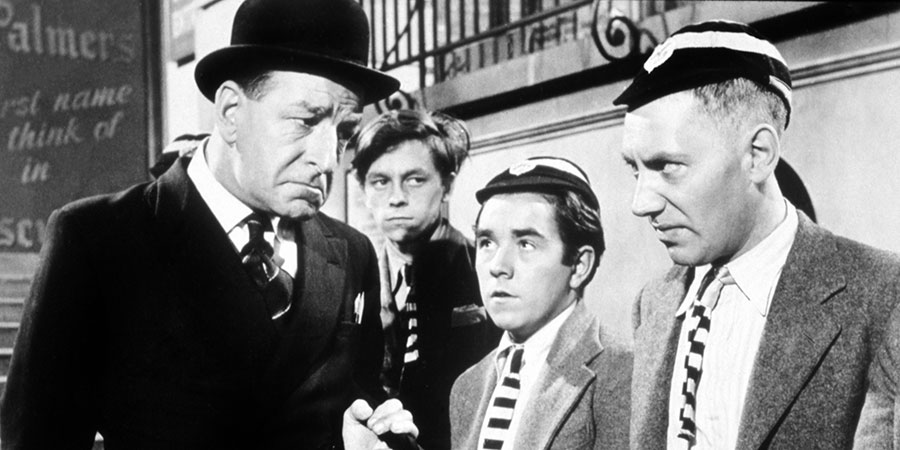 Top Of The Form

Self-styled 'Professor' Ronnie Fortescue is a bookmaker's worst nightmare: an habitual gambler who has devised a system for picking horse-race winners that appears to actually work!

When a group of bookies' heavies set to put an end to his endeavour, Fortescue makes a break for it. They give chase, but he ducks off track - and unwittingly straight into the grounds of a small boys' school, currently troubled, in threat of closure by the government, and in search of a new headmaster. Keen not to be sent packing and right back into the path of the heavies, Fortescue doubles-down on his professor act and before he knows it finds himself employed as the school's new master by its elderly proprietress, Mrs. Bagshot.

Installed in his safe new position, Fortescue's soon facing an altogether different challenge: a full class of trouble-making teenage boys! Fast on the road to adulthood and their own lives of dishonesty, if not necessarily criminality, the boys' antics include their very own turf accountancy ring - and self-appointed class bookie 'Honest' Albert is anything but!

It is not long before opportunity for a different kind of swindle arises as the boys head to London to take part in an inter-school contest to prove their worth to the education ministry. Despite their lack of quality schooling, the boys from Bagshot come up victorious after a thoroughly well-cheated French exam, and find themselves winning a trip to Paris and special, honoured reception at and guided tour of an esteemed museum in the continental capital.

However, the cohorts of one pupil's imprisoned elder brother, Arty Jones, have got wind of the trip and have a plot of their own. Springing Arty from prison, he ensconces himself with the group, intending to use their privileged access at the museum as opportunity to steal a priceless piece of jewellery that once belonged to Marie Antoinette...