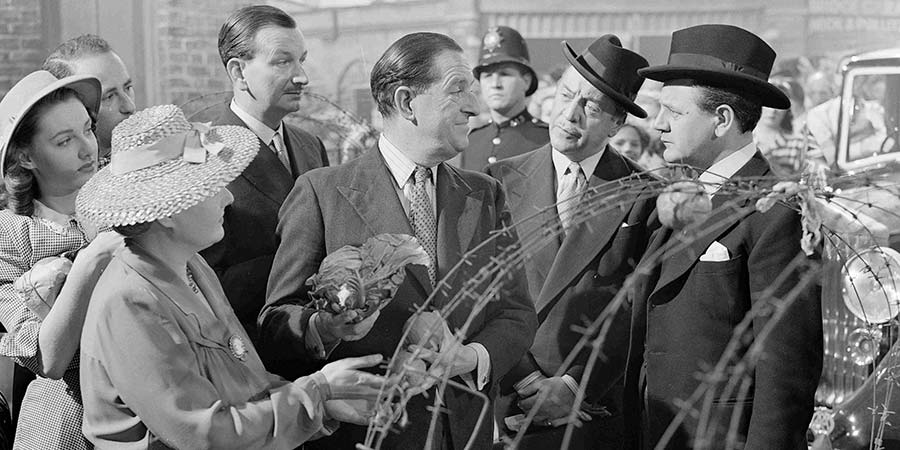 Ealing comedy about a legal discovery that leads the residents of Pimlico to declare themselves an independent nation, Burgundy

It is 1947 and amidst the post-Blitz ravages of war-torn London, redevelopment is slowly beginning to take place. But whilst children play happily on the impromptu playgrounds created by bomb sites, their parents are still struggling with the continued hardship of the age and strict rationing on food and clothing in particular.

When a group of Pimlico children accidentally detonate an unexploded German bomb on just such a levelled site, the adults rush to assist and shopkeeper Arthur Pemberton manages to slip into the deep hole, still billowing dust. Dazed, he is not sure what he can see at the bottom, but a return visit later that night with his adult daughter quickly confirms the discovery of a long-forgotten chamber containing an astounding haul of treasure and an historic royal charter. Calling in an expert from one of London's top universities, it is established to be a never-revoked charter stating that the area - modern Pimlico - is not in fact English soil, but part of the Duchy of Burgundy.

The residents are initially shocked by news of their new technical nationality, but when they realise it offers them the chance to be free of rationing, Sunday trading laws, sales taxes and pub licensing regulations, they jump into their new-found nationhood with both feet!

However, things become problematic when the Burgundians try to deal with Whitehall. As they attempt to reach an agreement with the British governmental machine over cross-border relations, the officials push back hard. Matters quickly escalate and Burgundy is left completely isolated, the border marked by rolls of barbed wire and patrolled day and night by a police watch.

The Burgundians find England looks rosier by the minute when they are cut off from the water network and their food supplies run low, but Whitehall soon realises it hasn't counted on the free-spirited, anti-authoritarian feeling of other ordinary Londoners, and indeed the wider country at large!