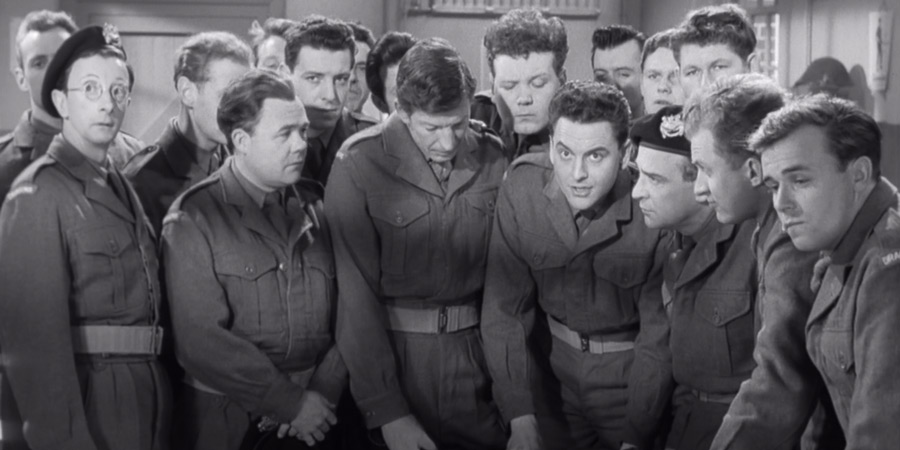 The first Carry On film. Sergeant Grimshawe is desperate to win the award for best troop before he retires

Having spent the previous six years at Heathercrest National Service Depot and due for retirement in a mere 10 weeks, Sgt. Grimshawe is determined to achieve his life's goal and train the depot's best platoon at least once. Unfortunately, the body of men he's landed with could be little worse if they tried: hypochondriacs, lovelorn, lacking in agression, uncoordinated, and just plain inept.

Grimshawe soon regrets betting a full £50 on being able to turn out the camp's best platoon and takes his Corporal's suggestion to be a little more lenient than usual in an attempt to cajole rather than scare the motley crew into shape.

It's a tough 69 days training, particularly with Charlie Sage having been called up on his wedding day, the intellectual and evasive Bailey, and hypochondriac Horace Strong becoming the objection of NAAFI Norah's affections - but when the boys overhear Grimshawe's distress at his final failure, they've got one last chance to pull out all the stops.

Tagline
The biggest 'shower' that ever 'reigned' in the British army!
Part of

Production company
Picture
Black and white
Soundtrack
Music composed and directed by Bruce Montgomery and played by The Band of The Coldstream Guards.
Laugh track
None