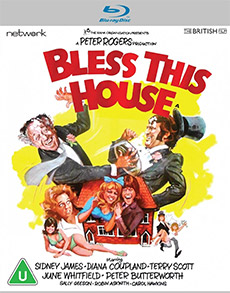 Comedy legend Sid James reprises his role as the perpetually bewildered head of a dysfunctional family in the hit film adaptation of the legendary '70s sitcom. Co-starring Diana Coupland, Sally Geeson and Confessions star Robin Askwith alongside Terry Scott and June Whitfield, Bless This House is produced and directed by Carry On maestros Peter Rogers and Gerald Thomas and is featured here as a brand new high definition remaster from original film elements in its original theatrical aspect ratio.

Sid's idyllic dream of long lie-ins and fraternal wine-making with his pal Trevor is shattered when Ronald Baines and his family move in next door. Things go from bad to worse due to some accidental property destruction on Sid's part - and daughter Sally's over-enthusiastic attempt to put out a bonfire!