When iconic suffrage movement leader Emmeline Pankhurst stops in Banbury to visit the group, not all turns out as expected. Except in the eyes of Helen, who it seems is no stranger to Ms Pankhurst...
Preview clips 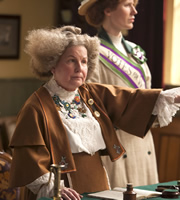 Margaret has written to the great Emmeline Pankhurst to tell her of the exploits of Banbury Intricate Craft Circle Politely Requests Women's Suffrage: picketing the Post Office. The group are surprised when a response from Mrs Pankhurst herself arrives, announcing that she will be taking in Banbury on her tour of Oxfordshire and wishes to attend one of the group's meetings.

The ladies soon realise that Mrs Pankhurst's arrival is more imminent than previously thought and elaborate preparations for their 'Great Women Through the Ages' pageant are greatly condensed - and Gwen whips up her 10-minute trifle in just five.

However, when she arrives, the leader of the Suffragette movement doesn't quite match up to the great lady the women had envisioned. All of them except Helen that is, who, it emerges, has a history with Mrs Pankhurst, and her arrival brings back less than favourable memories.

Margaret has a letter from Emmeline Pankhurst.

The Banbury Intricate Craft Circle has a special visitor.