Variety show from the London Palladium, hosted by Jack Whitehall. With comedy performances from Sara Pascoe and Jack Carroll. 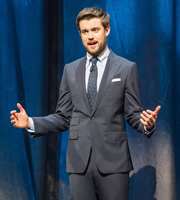 This episode features music performances from the legendary Simply Red, celebrating their 30th anniversary this year; and Jess Glynn who performs her best-selling number one single, Hold My Hand.

Variety acts include the incredible Japanese dance troupe EL Squad from The Wrecking Crew Orchestra and, from America, champion knife thrower Jack Dagger and his assistant The Unkillable Jenny showcase their skills and teach host Jack Whitehall a few tricks.

More music from Leona Lewis with an exclusive performance of her single Fire Under My Feet, plus comedy from Sara Pascoe and former Britain's Got Talent finalist, 16 year-old Jack Carroll.