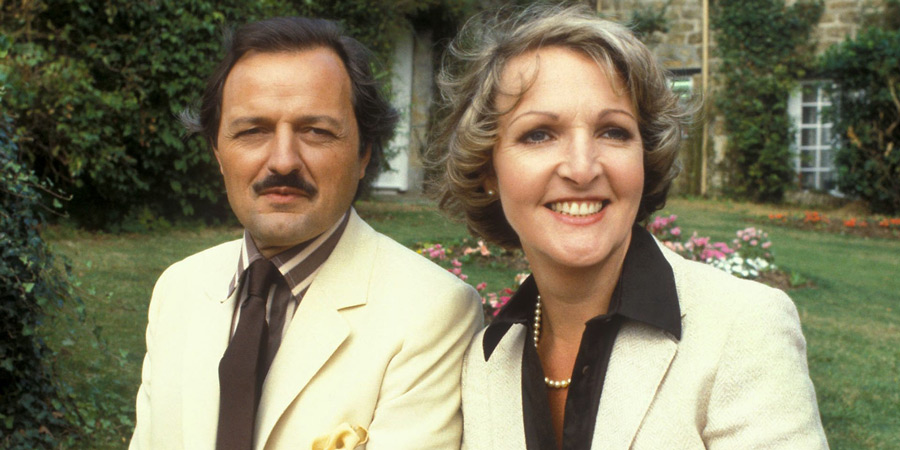 About To The Manor Born

The basic premise of To The Manor Born is simple: Audrey fforbes-Hamilton is delighted when her husband dies, leaving her in sole posession of their sprawling country estate and manor house, Grantleigh.

Unfortunately, before she's finished celebrating (since when was champagne served at a funeral?), Audrey discovers the extent of her late husband's debts. She is horrified to be advised that the only way to satisfy the creditors is to put Grantleigh up for sale.

Despite Audrey's best efforts, the home of the fforbes-Hamiltons is sold after some 400 years to Richard DeVere, a businessman. He may be top of a multi-national company, but "at bottom he's a grocer." Audrey's feelings toward Mr DeVere are not softened when she discovers that not only is he a city boy, but that he's a Czechoslovakian with the birth name Polouvicka!

However, Audrey has one last surprise to pull from her sleeve before leaving the estate: Grantleigh's sale left over just enough money for her to purchase the former gatehouse, 'The Lodge', a position which affords her a wonderful view of the grounds, and an even better view in through the Manor's windows.

The stage is set for a tempestuous love-hate relationship...

To The Manor Born is essentially a serialised sitcom, with a definite beginning and definite end. Most episodes follow a common format: Richard does something Audrey doesn't like, she takes him to task about it and generally acts like she still owns the place. When he fails to take a blind bit of notice, war is declared and finally someone triumphs.

Most of the duo's arguments are based on DeVere's instinct for efficiency, change and modernisation sitting squarely opposed to Audrey's "if it isn't broken, don't fix it" attitude toward the management of the estate. Unfortunately, whilst Richard's plans are at times a little sudden, Audrey often fails to realise that although the estate has existed in much the same way for 400-odd years, the reason her family no longer controls it is that some of those old ways of doing things are no longer cost-effective. Eventually both parties learn something: Audrey, that change is sometimes necessary and breeding and heritage aren't the only things that matter; and Richard that traditions are important, and that many of the "old ways" haven't changed for good reason.

Each of the three series has a different tone. The first series is a succession of conflicts with a definite air of competition; even though it's evident that both characters are attracted to each other they can't seem to agree on anything for more than five minutes so there are many sharp exchanges as they test each other's strength. By the second series they have come to accept (if not understand) each other, which contributes to a far more friendly and co-operative environment.

Understanding has largely arrived by Series 3. There are still some disagreements between the old and new orders, but they have generally progressed to a far more flirtatious than confrontational tone. Whilst Audrey continues to want her own way, she's far more amenable to Richard's charms and thus to making his ideas work.

The programme's themes are underpinned by the issue of the relationship between Audrey and Richard, and her changing attitude towards him. The first is based on the second, as only when Audrey can truly appreciate Richard as a man can there be any chance of lasting romance. From labelling him a possible "Mr Convenient" (in that he could be her way back to Grantleigh) in episode one, Audrey gradually comes to the point where it is she who proposes - and only once she no longer has anything material to gain from him.

The shift in attitude over the previous 19 episodes is gradual; outwardly Audrey's general demeanour toward Richard is slightly softer, but there's otherwise not a lot of difference. And by this point, having had to sell the estate, the only thing Richard can offer her that she doesn't already have is himself. Notably, that includes his Czech and city background; the very things she's spent the series deploring. She doesn't actually say she loves him, but she doesn't have to: why else would she want to marry him?

Whilst To The Manor Born is focussed on Audrey and Richard, it wouldn't be the same without the supporting characters. Of particular note are Audrey's faithful sidekick and school-friend Marjory, and Richard's mother Mrs Polouvicka, with her catalogue of Czechoslovakian sayings and misquoted English phrases to suit every situation.

A wide selection of other Grantleigh locals also play important roles in the comedy. There are some marvellous short scenes that almost exclude the likes of Audrey and Richard, such as the one involving a zealous Sergeant Major or the one with the "packet of Bee-Eaters". There are also a number of episodes where a considerable portion of the laughs come from characters who only appear once or twice, such as excitable film director Bob Roberts and City financier Greville Hartley.

Whilst working as a joke writer for BBC Radio in 1970, Peter Spence was entertained by a particular Cockney comedian's tale of a housewarming party. Having just purchased a large house in a Thames Valley village, said comedian invited guests to the house in the traditional manner - including the ageing lady who had sold him the property, having been unable to continue affording the running costs. Spence once explained: "His hilarious account of this grand lady, and of the chilling conversation he had with her at the party, was a perfect description of the character who later became Audrey fforbes-Hamilton."

Three years later, Peter Spence was married in the very church featured so prominently in To The Manor Born - his new wife's father was the owner of the Cricket St. Thomas estate and Cricket House, where the show would eventually come to be filmed. Initially, the couple moved to the country, but Spence found it difficult to continue working; whilst he picked up grains of ideas and inspiration in the Somerset village, he found that the country life afforded him only writers' block for his then-present engagements. After a number of years attempting to make a living in his new country existence, Mr and Mrs Spence returned to London.

It was around this time that the BBC were beginning to look for starring vehicles for the individual cast members of The Good Life. Back working for BBC Radio, Spence came to hear of the search and inspiration struck: Penelope Keith's snooty, upper-class manner as Margo Leadbetter would be perfectly suited to the grand country lady whose social climbdown he had heard of some 5 years beforehand.

And so, in 1976, a pilot episode for a new radio sitcom was recorded. It starred Penelope Keith in the now familiar role, and Bernard Braden as the American businessman who buys her ancestral estate. The BBC were so enamoured with the pilot, however, that it never aired: they were keen to turn the idea into a television programme. Little could be done whilst the hugely successful Good Life was still on air, and so the project was revived when it ended in 1978 - with additional writing in adapting Spence's original radio ideas from Christopher Bond, To The Manor Born was, well, born.

In 1997, more than fifteen years after the television series finished and more than twenty years after To The Manor Born was originally planned, 10 episodes were aired on BBC Radio 2. Six were adapted from the television series and four were newly written. Penelope Keith and Angela Thorne reprised their roles of Audrey and Marjory, but Richard was played by Keith Barron and Mrs Polouvicka by Margery Withers. Other cast members included Frank Middlemass as Ned and various other characters, and Nicholas McArdle as Brabinger and the Rector.

As was common for sitcoms at the time, Peter Spence also wrote two To The Manor Born novelisations in the mid 1980s; one each covering the first two series.

In 2007, To The Manor Born returned for a new one-off Christmas special featuring the original cast (Keith, Thorne and Bowles) back together for the first time in 26 years. The episode was set in the run-up to the couple's 25th wedding anniversary and saw the DeVere/fforbes-Hamilton couple childless, but employing Audrey's nephew, Adam, on the estate. Both Mrs Poo and Brabinger had long passed on, but the Rector was still as disapproving of Audrey as ever, and the couple bickered and disagreed just as always.