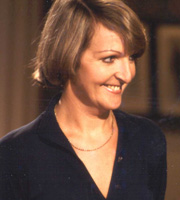 Audrey fforbes-Hamilton, descendant of a family with 400 years history of ownership of Grantleigh Estate, is best described as a law unto herself. Stubborn, opinionated and an utter snob, she considers herself as superior to just about everybody (unless they have a title). She is used to having her own way and is not above resorting to duplicity in order to get it.

Much of her time is spent finding out exactly what Richard is up to and invariably finding fault with whatever he does. When she considers him to have overstepped the mark by deviating from tradition or simply doing something she doesn't agree with, she instantly takes him to task. Quite ferociously too: it's doubtful whether there's a more effective herald of doom than the words 'I hear.' Little things like Richard being the owner of the estate and therefore entitled to do what he likes with it don't weigh with her for a moment; he's not a fforbes-Hamilton, so how can he possibly run their ancestral home properly?

Audrey quite quickly becomes more attached to Richard than she would have anyone (including herself) believe and this causes her to show a much more human side at times. She also has genuine affection for his mother, perhaps surprisingly, as Mrs Polouvicka is far more 'foreign' in her behaviour than Richard - he could pass for English easily whereas she certainly couldn't. But then Audrey's hardly a consistent person: she can express the opinion that 'privacy is very important' whilst gazing intently through binoculars into the window of Richard's study. 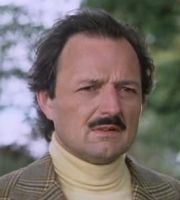 Richard DeVere was born Bedrich Polouvicki, son of a Czechoslovakian mother and Polish father. He came to England with his mother in 1939 and began his company, Cavendish Foods. He is proud of his background; his name change was just to be "more upmarket".

Charming in manner (he has a decided "twinkle in his eye when he looks at one"), handsome in appearance, Richard is not at all the villain Audrey is resolved to think him but simply a successful man determined to "crack the class system." He is unfailingly polite to Audrey despite the ample provocation to lose his temper (when she gets the better of him he is usually more amused than anything else), and is in fact adept at managing her. He is well able to put her in her place and can be just as devious as she can: on several occasions he tricks her into doing precisely what he wants, sometimes still keeping her under the impression that she's doing what she wants. He is clearly attracted to her very early on in the series but this doesn't mean that he goes out of his way to please her; he is a stubborn person himself and just as fond of his own way. 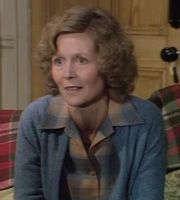 Marjory is Audrey's close friend; they were at school together and have always lived near each other. She is good-natured, easygoing, sentimental and a bit of a nut! Generally supportive of Audrey, she does sometimes protest against her more outrageous comments or schemes. She never refuses to participate in Audrey's plans though: her ever-ready sense of humour carries her cheerfully through most situations and it is very rare for the two of them to have a serious argument.

In many ways Marjory is still a schoolgirl at heart; it shows in her conversation and even the way she sits in a chair. She throws herself whole-heartedly into whatever she does and her activities - from producing the WI play to protecting the environment - are carried out with enthusiasm. She is good at making the best of things and tries to get Audrey to do the same: usually failing, but she never gives up!

Marjory has a decided weakness for a handsome man and is quite unable to resist Richard's charms; she has a crush on him from the minute he appears and special attention from him never fails to elicit a dreamy "oh gosh!" from her. However, she is very generous and quite ready to encourage Audrey's romance with Richard. 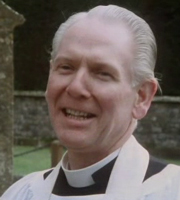 The Rector of Grantleigh is delighted when Audrey loses the Manor; he's only sorry she doesn't leave the neighbourhood altogether. His deferential manner and sympathetic smile can't quite hide his insincerity and there's a slipperiness about him that rarely goes away. The Rector is persistent in the collection of money for innumerable charities and is fond of quoting scriptures: usually at an inappropriate moment. 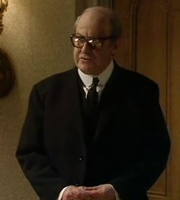 Brabinger is Audrey's butler. He has been with the fforbes-Hamilton family for years: he remembers Audrey's grandparents and apparently first came to the Manor as a 'lamp boy'. He is very proper although he is not above making a mild joke or two. His genuine affection for Audrey and loyalty to her family induces him to accompany her to the Lodge, where he helps her keep up the standards of behaviour suited to an aristocrat. 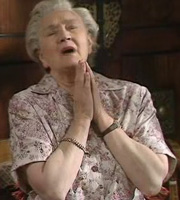 Mrs Maria Polouvicka, or Mrs Poo as she is affectionately known (the nickname began when Audrey couldn't pronounce Polouvicka properly), is Richard's sweet and dotty mother. She has an unaccountable dislike of foreigners, which she expresses in the most foreign accent you ever heard. Perhaps it's because she views herself and her son as being British - "we have been neutralised!" she says to Audrey. Meaning 'naturalised', of course, but that's a typical Mrs Poo mistake.

About half Richard's size, she is still occasionally prone to treat him as her little Bedrich: demanding whether he has his woolly vest on before venturing outside, and making him wind wool for her knitting are good examples. She is anxious to promote a match between him and Audrey, her efforts towards this varying from broad hints about the proper age to be married ("about forty-five, forty-six" apparently), to outright commands that "it is time you got married." She is also determined to throw them together at every opportunity and never gives up hoping that something will come of it.

Mrs Poo is famous for her Czechoslovakian sayings: "he who sits on the highest pinnacle still sits on his own backside," and "the cat who eats from the dog's bowl gets her whiskers bitten off," to name a couple. She seems to view them as clinchers to every argument; it certainly makes whoever she is talking to forget what they were saying to ask what on earth she means!