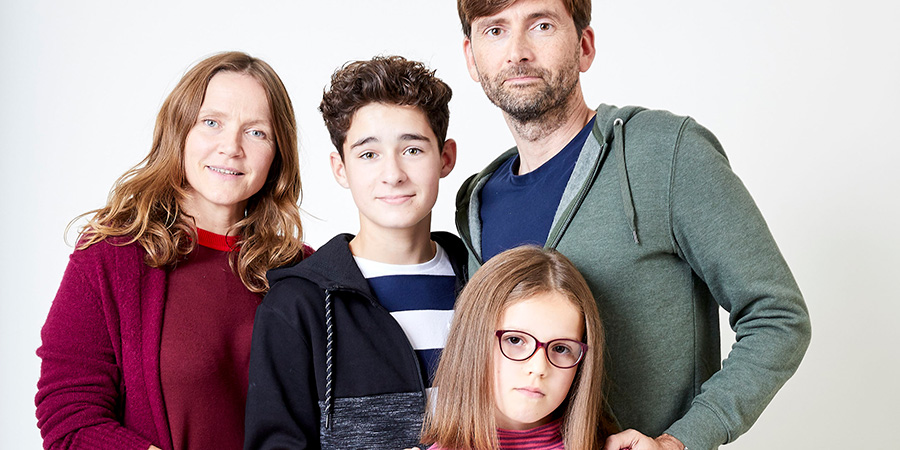 There She Goes is a comedy drama based on the real life experiences of writers Shaun Pye and Sarah Crawford, whose daughter was born with an extremely rare and, to date, undiagnosed chromosomal disorder.

We hear from them, and stars David Tennant and Jessica Hynes, below.

Can you tell us what's in store for Series 2?

Everything in There She Goes comes from our experiences with our daughter Joey, and since we wrote the first series Joey's been working very hard coming up with new material. New ways of causing chaos, new puzzles for us to solve, new challenges to overcome. For example, trying to explain to her that it can't be Christmas in mid-February. We hope the stories we are recounting will be funny, surprising, insightful and emotive.

In the earlier timeline the first series detailed how the strain of living with Rosie drove the family apart. The second series starts to show how as she gets older Rosie brings the family back together - it's a bit more 'us against the world'. 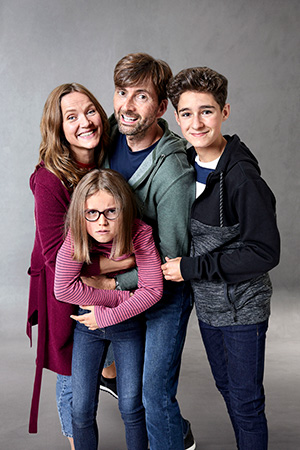 What reaction did you get to the first series? Did it surprise you both?

We were nervous about how the first series would be received, especially by parents or siblings of children with similar conditions. But the response was overwhelmingly positive. So many people got in touch to say, "my child has a learning disability, it's like watching my life on telly."

We've only ever intended to tell our daughter's story, but the fact that so much of it resonated with so many other people's stories was enormously comforting, that idea that we weren't alone. Other people were imperfectly raising their disabled children too!

What does the rest of the family think of the show?

The wider family have been hugely supportive. Obviously the grandparent characters are very broadly based on the real grandparents... but they've given their blessing anyway. Although Grandad John would claim he's not that belligerent and Grandma doesn't think she sings that much.

I think it's been quite cathartic for everyone really, allowing everyone to think about what was a terribly difficult period in our family's history. We were a close-knit family anyway, but if anything it might have brought us even closer.

How important is it to you both to have humour as well as the drama in the show?

We think it's important to have truth and, like in all families, sometimes situations will be funny and sometimes they really won't. If we can capture all of that then I think the show has integrity.

Put simply, Joey can do things that are so crazy by anyone else's standards it's hilarious. And then by the same token you can end up crying yourself to sleep. We wouldn't really categorise There She Goes as comedy-drama or drama-comedy. To us it's just... life with Joey.

What do you hope viewers will take away from this series?

Primarily we hope people laugh at the funny bits and are moved by the emotional bits - and enjoy the show as a whole.
We never set out for the show to be enlightening about learning disability. But from the reaction to the first series I think it was. For people in a similar situation it helped to reassure them that their experiences maybe weren't so strange. And for the majority of people who'd never encountered learning disability I think it did educate slightly and maybe made them more aware of what different challenges parents and siblings could face.

So laugh, cry and if you did happen to take more away from watching the show than just that... we'd be very proud to have contributed to that. 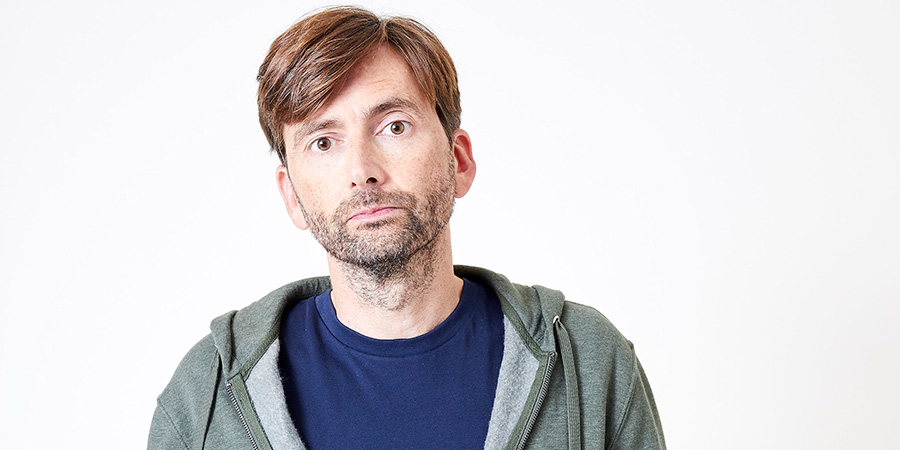 The new series picks up 18 months after the first series, can you tell us what's in store for the family?

We are back with the family as they continue to try to cope with everything life, fate and Rosie throws at them.

Viewers saw some pretty tense moments in Simon and Emily's relationship in the earlier timeline in Series 1, what was it like to film those scenes?

I think Jess and I were always very aware that we were telling Shaun and Sarah's story. It's pretty much autobiographical, and knowing that you are retelling often quite painful moments in the life of someone who is sitting round the corner watching on a monitor feels like a big responsibility. But that very truthfulness is what made the scripts so powerful and drew me to the story in the first place.

How was it being back on set with all the cast again?

Great. It felt like we'd never been away. I feel like we summon up the feeling of a genuine family quite readily.

We meet Simon's father, played by Gregor Fisher. What was it like working with him?

I first worked with Gregor on Rab C Nesbitt about 400 years ago. I've always thought he is an exceptional actor and he has been a bit of a hero of mine. I was so pleased he agreed to play my dad. He was as delightful and brilliant as I'd hoped and creates a distinctive and memorable character.

What reaction did you get to the first series?

I think people were surprised, moved, shocked and charmed. Families with similar challenges were often particularly delighted to see an honest depiction of the unique difficulties and particular mixture of experiences they face.

Where you surprised at the reaction you got?

Not at all, when I first read the script I knew it was something special and not really like anything I'd seen before. I just hoped we could make the show as it was written and preserve that unique voice.

There She Goes has a perfect balance of making the viewers laugh one minute and crying the next. Do you think it's important to show the humour as well as the drama?

I think it's important that the story is told truthfully and honestly. There is very little in the show that hasn't happened to Shaun and Sarah's family, so it's not about manufacturing comic moments or emotional scenes, it's just about honestly reflecting what happened.

What is it about Shaun and Sarah's writing that makes this show so appealing to you?

I think the reason this works is all down to Shaun and Sarah's honesty. Their willingness to be completely candid about their own shortcomings and difficulties, and indeed their achievements and victories, is what makes this story so identifiable.

What do you hope viewers will take away from the series?

For those who didn't see Series 1, I hope they'll take the chance to meet the Yates family. For those who know the show already I hope they'll be as keen to return to them as I was. I'm very proud to be part of There She Goes and want as many people as possible to see it. 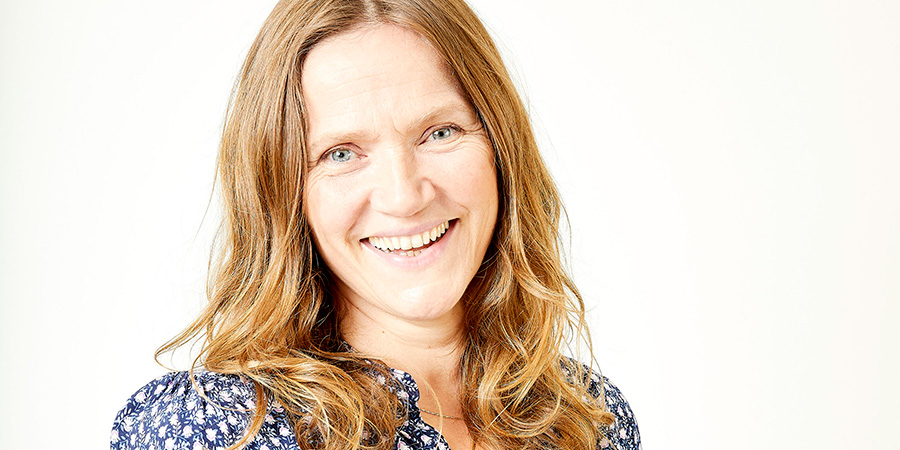 Jessica, firstly congratulations on winning the Bafta for There She Goes - how did it feel?

It was a wonderful night. I laddered my tights right before the ceremony began so I had to go up on stage bare-legged, which I felt a bit self-conscious about. A very very kind old friend texted after the show and said her husband had just said "Legs!" in a slightly Sid James way when I went up - I was pathetically grateful and happy when she told me this. I was also extremely grateful to get a Bafta for the show. It is one of the shows I'm most proud of being in.

Can you tell us what's in store for the family this series?

More fun, frolics and sleepless nights. Ben and Rosie are growing up and Emily and Simon meet those challenges in their own inimitable way: wine, jokes, Game Of Thrones, wine more jokes and wine.

Emily had some pretty emotional scenes in the first series, what was it like filming those scenes?

It was challenging in the best possible way - I wanted to do the brilliant script, story and character justice. I tried to do my absolute best work.

How was it being back on set with all the cast again?

Great - I love them. Simon the director was incredible with the children. He has the patience of a saint.

What's it like working with Miley Locke, who plays Rosie?

She's a brilliant actress and a wonderful girl. I am devoted to her.

What reaction did you get to the first series?

Overwhelming - it was extremely moving and humbling to be part of a comedy that reached people that felt they'd never had a voice before. I well up just thinking about it.

Where you surprised at the reaction you got?

I knew Shaun and Sarah had created something special. Simon and the team at Merman put the whole thing together so brilliantly that when I first saw it I did have an inkling that people would take to it and I was so happy that they did.

There She Goes has a perfect balance of making the viewers laugh one minute and crying the next. Do you think it's important to show the humour as well as the drama?

The truth is never all sad or all funny - it's usually a mix of the two.

What is it about Shaun and Sarah's writing that makes the show so appealing to you?

The honesty, bravery, intelligence and wit.

What do you hope viewer will take away from the series?

That love is the only reality.

More There She Goes interviews