Series 1 - Strangers In The Night

It's New Year's Eve and staff are hoping to be dismissed early. There's no such luck, unfortunately, due to a freak snow storm. 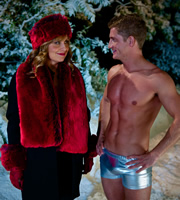 Alison is trapped in the sauna and Davina has nearly set Ginny's hair on fire, so, all in all, it's a typically shambolic day at the Hertfordshire health club. Except it's New Year's Eve and staff are hoping to be dismissed early. There's no such luck, unfortunately, and a freak snow storm means that no-one is going anywhere and Alison has to cancel her flashy party.

Hours of primping and preening are rendered pointless, but at least she won't be alone at midnight. Reluctantly huddling together in the blackout, conversation takes a spooky turn and it seems the team aren't alone...