Singing star Connie Fisher turns up to pour oil on troubled waters as the sketches, stand-up and songs continue from "the man who proves you don't have to be working-class or American to be obese" - Omid Djalili. 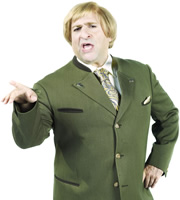 This week, Omid's characters include the NYPD chief who wants his happily married, non-drinking, courteous detective to be more colourful. Darts Player's Wife, Lambrusco, returns to encourage more viewers to "dream the dream", as she downs pints of bitter and has catfights over jumbo sausage rolls. And the extremely un-inventive Q returns to underwhelm James Bond with another gadget.

And the hills are alive as Omid steps into the extremely knowledgeable shoes of Marty - leader of Marty's Sound Of Music Tour. But Marty is a bit of a bully and his tour isn't very harmonious - that is until a very special guest turns up to bid "auf wiedersehen" to the tour guide tyrant once and for all...

Finally, Omid's stand-up routine takes the audience on another flight of fancy, taking in a romantic dinner with a pig, the al-Qaeda Christmas party and the Easter Bunny.