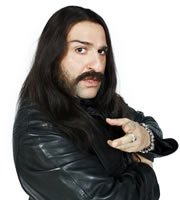 Omid gives some TV favourites a Middle-Eastern makeover as Sheiks In The City and Jihad's Army get the "Look Eastwards" treatment. Next, Omid dons facial hair and hose to bring Henry VIII to life in his own inimitable style, as he campaigns to be divorced from his feisty Spanish wife, Catherine of Aragon.
Preview clips

Local news from Omid Djalili, with an episode of Sheiks in the City and Jihad's Army.

Omid takes his stuff to the recycling bins.