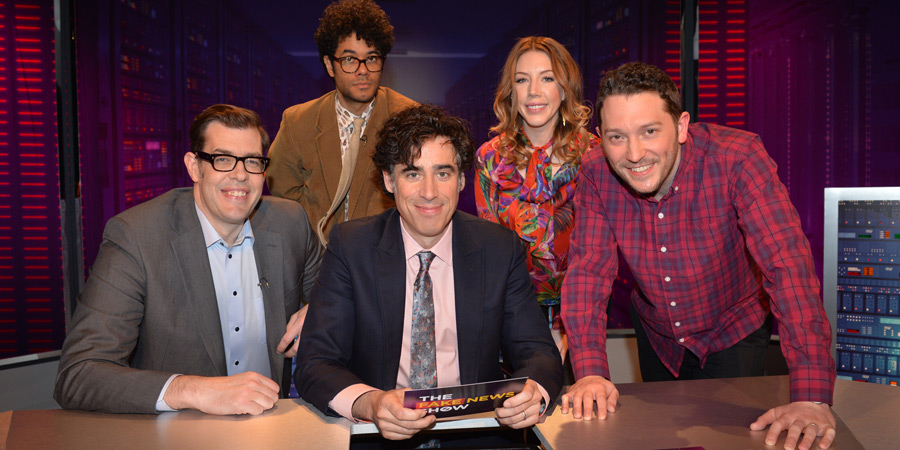 The Fake News Show might just be the only news show you can trust. Or can you?
Preview clips

Was Donald Trump actually born and raised in Pakistan? Is Hillary Clinton secretly a robot? And what do people think Steven Spielberg once did to a triceratops? As part of Channel 4's Fake News Week, this brand new comedy panel show peers behind the wobbly façade of fake news, dissects the outlandish headlines, alternative facts, dodgy Photoshops, and all-too-believable viral clips that have pushed post-truth to the front pages.

At a time when world events are increasingly stranger than fiction, and no one knows who or what to believe, The Fake News Show might just be the only news show you can trust. Or can you? Hosted by Stephen Mangan and with a veritable feast of some of the sharpest and funniest minds around, including Richard Osman, Katherine Ryan, Jon Richardson and Richard Ayoade, this is one night of hilarity not to be missed.

The Tragedy Of The (Non-Existent) Bowling Green Massacre

Richard Ayoade, Katherine Ryan, Jon Richardson, Richard Osman and Stephen Mangan discuss the fake news and alternative facts of the modern world, including the tragedy of the very non-existent Bowling Green Massacre being brought up by President Donald Trump's Counselor, Kellyanne Conway. Richard Osman then goes to describe the issue of fake news and how it has partially come to be.

The panellists are challenged to create their own pieces of Fake News on Twitter, with more success than anticipated!