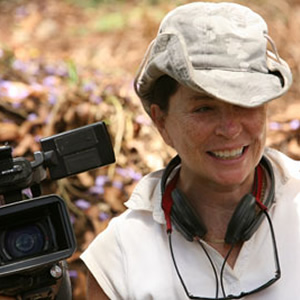 Tira Shubart (pictured, right), the co-creator, co-writer and co-producer of Taking The Flak, kindly gave us some of her time to explain the back-story of the show...

Hi Tira. Thanks for talking to us. Congratulations on completing Taking The Flak because, if we understand correctly, it has been a fairly long journey to get it to the screen?

Well, next week, it will actually be 10 years since this project was first conceived! I handed a script to Jon Plowman back in 1999, but it wasn't until five years go that things started to happen...

You see, my back story is that I'm a news producer with 20 years experience of covering news in 40 countries. It wasn't until Jon Rolph, my co-writer, came on board with his comedy background and we started re-writing it together that it all started clicking. And current affairs producer Sandra Jones added in suggestions on episode one. Then, another two years later, we got a commission.

We shot the first episode in Kenya in January 2007 and that got us commissioned for the full series. We were planning on filming the rest of the episodes exactly twelve months later... however, Kenya erupted in post-election violence, and we ended up with a situation where our plans to film a fictional conflict were being scuppered by an actual conflict. There were many real BBC news people in the country at the time covering the un-folding conflict, and they were wearing real flak jackets!

So the whole thing got put on ice and, of course, at that stage we worried very much whether the project would be pulled entirely. But then, thankfully, the possibility of moving it to Tanzania came up...

We were the first feature to film in Tanzania since... you'll love this... John Wayne filmed the incredibly bad Hatari (which means 'danger' in Swahili) there in 1961. So, anyway, we filmed the series out in Tanzania last autumn and now finally we're on the air. So, it's a very large and collected 'phew'! 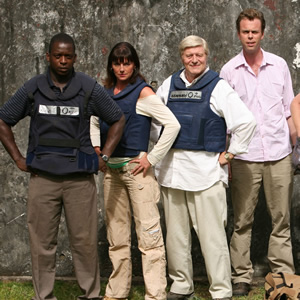 With all the hassle involved in filming on location, would it not have been easier to make the series on the back lot of a TV studio in England?

This series is a love letter to Africa. When you see it, I hope you feel as we did that the location is one of our characters. It's an astonishingly beautiful country and you only have to look at so many wildlife documentaries to see that. The country plays very much a part in our show and, particularly as the series develops with the backdrop of the Rift Valley and Kilimanjaro in the background.

Plus, filming on location meant we also have a certain number of African animals as extras. I must say, here's a note to anyone who is writing a script: do not put animals into your script because, guess what, they don't take directions very well! Ha ha.

Did you find it odd moving from the world of journalism where delivering facts quickly and accurately is key, to the world of TV production where you can make things up?

Yes, it's a definite change. Of course, in news, one is used to the very instant gratification you have. You see something, you do a report on it, and it's on TV that night. So writing and filming Taking The Flak was very, very different for me as the timescales are, of course, enormously different too.

Plus, also, the number of people involved took some getting used to. When we first started filming Taking The Flak, I looked across our set and would think 'why do we have all these people here?' There's 25 or so people on set, which is many more than a TV news report. But I soon learnt everybody is vital.

I think the thing that all of us love watching on TV, is the craft of the shows. The camera department, the lighting, sound, the props, the art department, make-up, costume - you need to have them all there to create that fictional world and make that world believable. 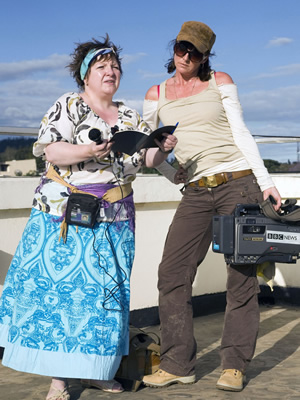 So, next time you're on a news report, are you now going to be tempted to try and take a full scale drama production crew with you then too?

You know what, when you're on a news story in the field, the one thing you don't worry about is costume continuity... but I tell you what, it is very nice to have those runners who rush up to you when you're boiling hot and offer you a nice cold drink. So, I've love to keep that aspect!

We guess a question you are going to get asked a lot, particularly as the series progresses, is this: how much of is the show is based on things that actually happened in real life?

Well, yes, some of the things in the show are things that have happened to me or my colleagues and then exaggerated for comic effect. And just as many incidents are simply fictional. The things about journalists is that we can be awful show-offs when we are trading stories with colleagues after the event... it has been known to happen on occasion!

How about the characters, are any of them based on anyone in real life?

No they aren't. There is some press speculation, but they honestly aren't. But anyone who has worked in the field probably has something in common with one of the characters. Before working for the BBC, I was a news producer for some Canadian and American networks, so some characters are influenced by those journalists as well.

Being a news producer means not only dealing with the logistics and elements of editorial guidance, but also sometimes sorting out the personal problems of your reporters. Sometimes unexpected problems. There was one Canadian reporter who always used to seduce the un-obtainable person on a story and would then just disappear off, and the producer would be left to pick up the pieces. But usually journalists barely have enough to time to actually do the work of getting the story - you'd have to be a master of speed dating to have time for much else! In summary though, the answer is 'no'. It's a work of fiction. I'd also very much like to say that my co-writer Jon Rolph comes from the world of comedy and has never mixed in the world of journalists... so a lot of it has come entirely from his imagination too. I'm flattered people are saying 'that must be so and so', but Jon and I have created a work of fiction.

We guess if people are seeing connections that aren't intended, that means you must have got the right mix of comedy and realism! So that's a good compliment. Well, thanks for your time Tira, and best of luck with the series!