Just how did Bono meet his three trusty disciples/band members? What did his Dad think of his beliefs that he could really change the world? 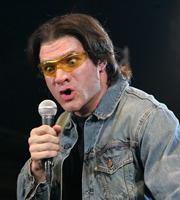 How did Bono progress from child messiah to international superstar? How did he go on to create Live Aid and Live 8 with Sir Bob Geldof? What did God and the Pope have to say when they met him? And how did he go about saving the world with just the power of rock and roll - and some cool sunglasses - to make him look clever?