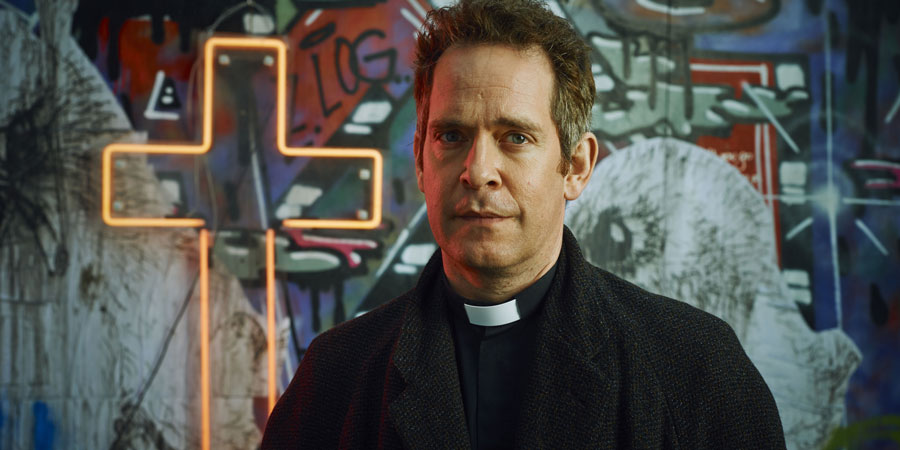 Rev is a contemporary sitcom about the daily frustrations and moral conflicts of Reverend Adam Smallbone - a Church of England Vicar who was 'promoted' from a sleepy rural parish to the busy, inner-city world of St Saviour's, in East London. It's a world he has little experience of, and at first it shows - it really shows.

It is an impossibly difficult job being a good, modern, city vicar. And, equally, it's a very hard job being married to one. Alex - Adam's long-suffering wife - does her best to support him, but she's got her own career as a solicitor to worry about. And she is no-one's idea of a conventional vicar's wife.

Anybody can, and does, come into St Saviour's - and into Adam's life - from scheming MPs trying to educate their children on the cheap to Colin, a heavy drinking, unemployable lost soul who is Adam's most devoted parishioner.

Then there's Mick, the local crackhead in need of £20 to visit his "dying mother" in Southend - she's died three times in the last 12 months.

Every day throws up a moral conflict for the vicar. Adam's door must always be open to urban sophisticates with ulterior motives, the chronically lonely, the lost, the homeless, the poor and the insane. All are welcome at St Saviour's and Adam can't turn any of them away - even if they're clearly lying, mad or just very annoying.

In addition to caring for his flock, Adam has to worry about the financial burden of running a huge, decaying building - with a smashed stained glass window - and a dwindling congregation. He has to contend with hopeless volunteers, ambitious church rivals, the sinister attentions of the Archdeacon and the romantic attentions of Adoha, a renowned "cassock-chaser" and church regular. Even his supposedly supportive Lay Reader Nigel is a pedantic careerist who thinks he should be running the place himself.

Heavily researched and supported by anecdotes from a number of working city vicars and Church insiders, Rev lifts the lid on how the modern Church actually functions and what life is really like in a dog collar.

Series 2: Adam Smallbone is still trying to negotiate the moral maze of life within his East London parish. No longer a novice at St Saviour's since his move from rural Suffolk, surviving one winter has by no means made him an experienced urbanite and now it's time to tackle summer in the city - before he can mark the end of the year by celebrating his first Christmas in London.

Adam continues to endure the "support" of hopeless volunteers as he navigates the perils of inner-city parish life. Heavy drinking lost soul Colin remains reliably erratic; cassock-chasing Adoha's passion for her priest is reaching fever pitch; and pedantic lay reader Nigel goes out of his way to be no help at all. Of course, they all want something - all the time. Even Mick the local crackhead needs more than cash now.

As Adam struggles to meet everyone else's demands, his wife Alex's patience is running perilously thin. She needs something too - and what she wants is life-changing...

Series 3: The third series starts with Alex gives birth to their daughter in dramatic circumstances. The church is also under great financial pressure, and ultimately at risk of being closed down. Eveything in Adam's world looks set to come to the boil.