The Archdeacon tells Adam his collection plates are too light.
Preview clip 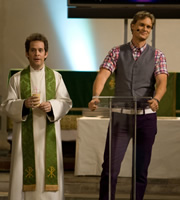 When the Archdeacon tells Adam his collection plates are too light, salvation appears to come in the form of fellow priest Darren Betts.

Darren needs a temporary venue for services while his own church is renovated, so Adam welcomes Darren and his huge congregation of young and fashionable evangelists with open arms. But the union soon becomes a battle for hearts and minds as Darren refuses to leave Adam's church. There's tension at home too - Adam's wife, Alex, is feeling neglected and announces they need to rekindle their love life.

Darren Boyd guest stars as Darren Betts - the handsome evangelical vicar who has a hypnotic gaze, religious certainty, money and a crowd of young shiny worshippers.

St. Saviour's has been given a makeover.