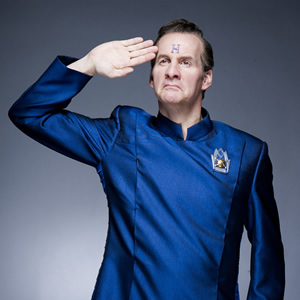 Rimmer was a complete and total failure in life and death. He was 2nd Technician on Red Dwarf though he always wanted to be an officer. However after sitting and failing his Asto-navigation exam on no less than 13 occasions and doing the same with his engineering exam 11 times it was pretty clear it was not meant to be. The final blow came when he was killed in the radiation leak that wiped out Red Dwarf as a consequence of his own failure to seal a drive plate. After his death he was brought back as a hologram to keep Lister sane.

As well as a failure at his career, he has been a failure in friendships and relationships. He has had only one sexual encounter, that was with the ship's boxing champion Yvonne McGruder and even then she had concussion. His only real friend has been Inflatable Rachel and she's now got a puncture.

Rimmer's unpopularity is down to the simple fact that he's a total Smeghead. His interests include Hammond Organ music, Morris Dancing and 20th Century telegraph poles. As for his family, his father hated him and despite Arnold's attempts to make him proud of him he never once said "Well Done" to him. His mother also hated him and had no time for idiots like Arnold, she even called him 'Rimmer'. His brothers were smart, handsome, brave and intelligent and they bullied Arnold mercilessly. No wonder Rimmer turned out as he did, at least that's what he always says... 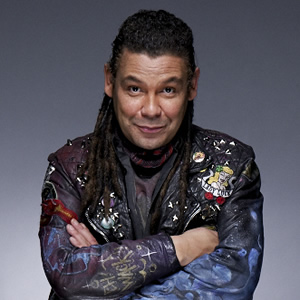 Dave Lister is the last human being alive, following a radiation leak that wiped out Red Dwarf. He survived due to being in stasis (deep freeze) for smuggling a cat on board. Lister is a complete and total slob. He likes nothing better than to sit around eating Vindaloo and drinking lager all day.

Lister was found under a pool table in a box with the word Ouroboros on it (he thought for years it was 'Our Rob' or 'Ross' badly spelled). He grew up in Liverpool where he got involved with acts such as scrumping for cars and stealing hotel rooms. He lost his virginity to Michelle Fisher at the age of 12.

After leaving his job of 10 years in supermarket because he didn't want to get tied down to a career, he ended up aboard Red Dwarf as a lowly 3rd Technician. Whilst on board, he met Navigation officer Kristine Kochanski and had a dream of them having a farm on Fiji and opening a chain of hot dog and doughnut diners. Alas, this dream was cut short when she was killed in the radiation leak and ended up 3 million years into deep space.

After the accident, Lister experienced things he never imagined were possible. He played pool with planets, visited parallel universes, gave birth to twins, went to a backwards version of Earth, travelled in time, met Hitler, married a GELF (against his will) and, most amazingly, he once tasted an edible Pot Noodle. 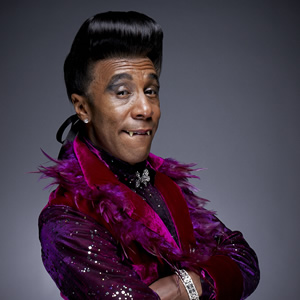 Cat evolved from Lister's pet cat Frankenstein who was safely sealed in the hold during the radiation leak aboard Red Dwarf. Cat is a self-obsessed, vain and superficial character (he considers these to be his best features). He loves nothing better than sleeping, eating and looking good. Whilst he likes most of his crewmates he would still gladly let them die if saving them meant interrupting his lunch of one of his naps (of which he must have 9 or 10 so as to have enough energy for his main snooze).

He is also very much against doing the W word, or as most people know it, "work" (He has a note from his Mummy, or so he claims).

As the Cat's vanity knows no bounds, it's hardly surprising that he was utterly disgusted when, during their encounter with the Despair Squid, a group hallucination led the crew to believe Cat was really a no-style geek who wore ironed flares, a nylon shirt, a cardigan and anorak, carried a Thermos and lunch box and had bucked teeth that druids could use as a place of worship. Worse still, his name was Duane Dibbley. Thankfully for the Cat, it turned out to be a hallucination... though it did almost drive him to suicide because, as he pointed out, "superficial" is his middle name. 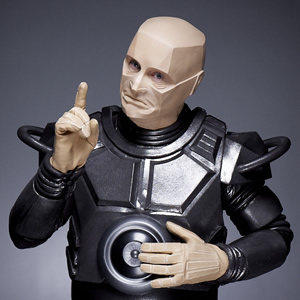 Kryten is a series 4000 Service Mechanoid originally posted to the SS Nova 5. Sadly the ship crashed killing all the crew... though it took Kryten a few centuries to realise this. He was eventually rescued by Lister & Co and taken aboard Red Dwarf.

Despite the fact that Kryten was quite happy obediently completing the tasks Rimmer gave him, Lister was determined to break his programming. The result was that Kryten rebelled against Rimmer and left on Lister's space bike, only to fly straight into an asteroid. Lister later repaired him but he was never the same again.

With Lister's help Kryten learnt to lie, cheat, and develop emotions of his own - much to Rimmer's annoyance, because not only did Kryten have more knowledge in Space Corp Procedure than him but he also commanded more respect from Lister and Cat. The droid originally designed to clean toilets now has a position of authority and respect.

Kryten's development continued over the years and the arrival of Kochanski caused new emotions to surface. Those of anger, resentment and jealousy towards the new crew member whom he was convinced would lure his beloved Mr Lister away with all her "in and out bits". Not only that but she put the salad cream in the cupboard and her pants in her socks draw. 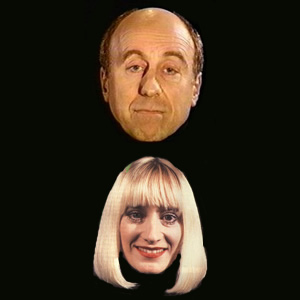 Holly is the Red Dwarf computer with an IQ of 6000 ("the same IQ as 6000 PE teachers and 12,000 car park attendants"). It was Holly who alerted Captain Hollister to the presence of Frankenstein (Lister's Cat) aboard Red Dwarf which led to Lister getting 18 months in Stasis.

After the crew were wiped out in the radiation leak, Holly was forced to spend the next 3 million years by himself during which time he went "a bit peculiar".

When he finally released Lister from Stasis, Holly knew Lister needed to be kept sane with some company. Holly had the ability to recreate ONE crewmember as a hologram to keep Lister company. He had a choice of 168 people and there were several Lister would have been happy with... Peterson, Chen, Selby, even his lost love Kochanski. However for some reason Holly chose Lister's old bunkmate Rimmer. The crew member Lister hated the most. Ultimately it proved to be the right choice as Lister was able to stay sane by winding Rimmer up constantly.

Two years into the trek back to Earth, Holly invented the Holly Hop Drive to get them back to Earth instantly. However it backfired and they ended up in another dimension. There he met and fell in love with Hilly a female version of himself. On the return to their universe Holly had a head change to look like Hilly. He remained "a she" for the next three years until Kryten's nanobots stole Red Dwarf and restored Holly to his former self and the crew discovered him, 200 years later, as a male again. Despite being left to rot for two centuries Holly had lost nothing, he was back and kicking bottom. 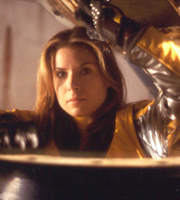 Kochanski was the chief navigation officer aboard Red Dwarf and also the object of Lister's affections. Lister always had a dream of living with her on a farm on Fiji and owning a chain of hot dog and doughnut diners. Alas, she died before he could tell her of the plan.

Years later, whilst investigating a dimensional tear, the crew encountered another version of Kochanski, a version that had survived the accident because she had discovered Frankenstein (Lister's pet cat) and taken him to be disintegrated. Unfortunately she couldn't do it, they found the cat and she got the 18 months in stasis that Lister should have had. She was released 3 million years later to find herself the last human being alive. To keep her sane, Holly (the ship's computer) brought back her ex-boyfriend Dave Lister as a hologram. Being a hologram changed Lister and made him more sensitive and less of a slob. He became tasteful and sophisticated and Kochanski fell in love with him all over again.

Whilst the two crews were talking, a GELF ship carrying Lister's jilted wife away attacked the link and Kochanski was caught on the wrong side with our Lister and a very jealous Kryten who was determined to get rid of her before she could turn Lister's head with her 'in and out bits'.

Gradually 'Kris' settled into life aboard our Red Dwarf but she still dreamed of one day going home to her much better Lister.

She hasn't been seen in the most recent few series. 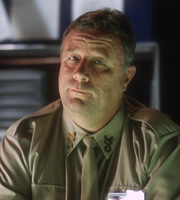 Captain Hollister was the Captain of Red Dwarf. It was he who sentenced Lister to 18 months in stasis.

Hollister was killed along with his crew in the radiation leak, but he was later resurrected by Kryten's nanobots.

To say that Hollister thinks Rimmer is stupid would be an understatement. He has described Rimmer as "astoundingly zealous, possibly mad and probably has more teeth than brain cells", Rimmer likewise thinks his captain is small minded petty thinking modo but still respects him and sucks up to him (this is despite the fact his family crest is made up of two cream buns and a profiterole). Rimmer would still love be a thinner less bloated version of Hollister. 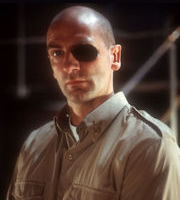 Ackerman was the warden in the Brig on Red Dwarf or 'the tank', as it's otherwise known.

Ackerman is a nasty piece of work, despite his insistence that he is in fact "lovely" and that his nickname is "Nicey Ackerman".

Within minutes of arriving in the tank at the start of Series 8, the Dwarfers managed to get on the wrong side of him thanks to the fact Cat said he seemed a nice guy without asking Ackerman's permission to do that. 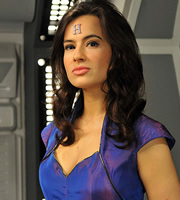 Katerina pops up in the Back To Earth specials. Strict, serious, and judgmental, she is a hologram of Russian heritage and speaks with a strong accent.

She uses her superior rank to make herself the ship's hologram and tries to have Rimmer deactivated and destroyed.