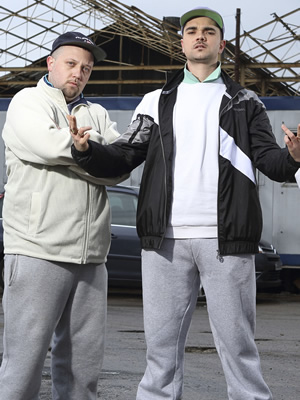 The mockumentary series People Just Do Nothing has established a fan base via BBC iPlayer. The show, which is based around the second most popular pirate radio station in West London, is now set to expand that with a run on BBC Three.

Below we meet Kurupt FM founders MC Grindah (played by Allan Mustafa) and DJ Beats (Hugo Chegwin), who tell us a little more about the series and the radio station...

What is Kurupt FM?

Grindah: Simple, it's an urban powerhouse slash radio station slash family unit. It's the biggest and baddest pirate radio station in the land, aka Kurupt - believe 108.9 on your dial yeah.

Beats: We transmit throughout the whole of West London. Obviously once you get to Shepherd's Bush it gets a bit white-noisy but we still have a lot of fans down Bush and White City. I reckon there is a lot of people that drive closer to the transmitter in the car and maybe set up a recording.

What would you be doing if it wasn't for Kurupt FM?

Grindah: Probably in the slammer, you know like what with the street life and that. When you are in that life street mentality, when you are raised in this, yeah, you've got either music or jail. D'you know what I mean?

Beats: I'd probably work in Megabowl Feltham cause my cousin's got a little job there, so he'd probably hook me up with that.

Why did you decide to let a film crew follow you?

Grindah: If you are someone in demand with fans and everything then you've got to give something back. This was our way of letting the fans see what goes on behind the scenes at Kurupt FM and for us to show other radio stations how it's done.

Grindah: How to run a leading pirate radio station and deal with the little dramas that unfold on a day to day basis. How to be a powerful and capable leader.

Beats: We tried to make them cut the bits where we didn't look capable but they...

Who are your influences? 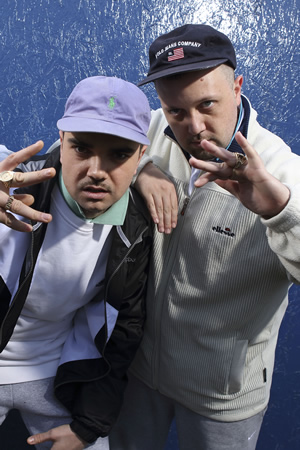 Are you worried that by appearing in this series the authorities will find out and close Kurupt FM down?

Grindah: Nah cos we made the crew wear their jumpers over their heads when they came up the stairs so even if they knew what block it is there's no way they could know what floor it is.

Beats: Exactly. Plus we took the number off the door.

Grindah: Don't tell them that! Cos now they'll just look for the one with no number.

Beats: I'll put it back up then.

Is it difficult to juggle running Kurupt FM with family life?

Beats: I've just recently become a dad so I'm still getting used to it. Having another mouth to feed and that.

Grindah: I live with the Mrs and we've got a little one, Angel, and she's alright cos she's tiny. Only eats pathetic amounts of food. She could basically live off my leftovers.

Beats: Yeah my son is seventeen though. And he's got a very powerful physique to maintain. It feels good to be a provider, even if it's not financially. Like, if my girlfriend Roche gives me money to go shop and I cook up a little meal for the family - that's rewarding.

Grindah: I just let Miche go shop, cut out the middle man. To be honest, Kurupt FM takes up most of my time though. I haven't got the luxury of spending loads of time with the family... going out to picnics and... swimming lessons... I don't need to know how to swim. I live in London, not on an island!

Do you ever get the chance to meet any of your listeners?

Grindah: Yeah, we met this one geezer and he wanted us to sign his shirt.

Grindah: He won a competition to come and meet us, bless him. Ended up signing his shirt, getting a picture taken with him. Probably would have done other stuff but he had to get back to work.

Beats: Yeah, we actually signed the inside of his shirt so he wouldn't get in trouble. He was actually saying "don't worry about it - let's just leave it" but we couldn't let him go away empty handed.

Grindah: Yeah he was like "It's fine, I don't need you to sign anything"! Imagine if he'd left without us signing anything! He would have kicked himself!

Grindah: Yeah but that's not a saying. 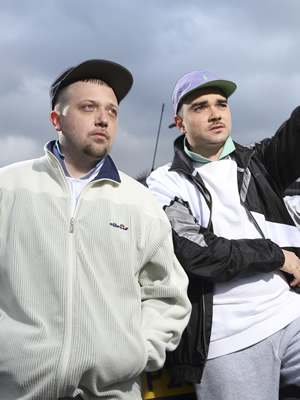 Does the success of Kurupt FM mean you ever get recognised when you are out and about?

Beats: Yeah Grindah gets stopped all the time. Innit?

Grindah: Yeah course. Well, not stopped... but I'll see them looking at me and I know they're thinking 'ah, that's MC Grindah'

Beats: Maybe people think that about me sometimes as well actually... but I just don't realise...

Grindah: Nah, probably just me cos I'm the main one. They don't know your face.

Beats: They don't know your face either though?

How do you keep things fresh for your listeners?

Beats: Yeah we don't. Don't we? What do we keep things then?

Grindah: We keep things old school. How it should be. We play strictly the classics from back in the day. None of this new deep house dub step madness that all the kids with back to front Obey caps are listening to these days.

Beats: Yeah exactly! We have kept the same sound for the last 12 years and people still love it today cos we've kept it fresh.

Beats: Or a really nice sandwich.

Where do you see yourself in five years from now?

Grindah: Probably Ibiza... just getting paid bare money to play garage music and drink bare cocktails. I'll be topless, dripping with sweat, MCing on a beach, DJ Beats behind me...

Beats: Yeah and I'm wearing an open Burberry shirt with the matching shorts... banging out the tunes whilst also keeping an eye on your back cos I know you get burnt easily.

Grindah: Nah Miche will be there so let her do that, you just concentrate on the mix.

Do you have any plans for the future of the station?

Grindah: Basically just keep expanding. We've got the I Am Kurupt range coming very soon - or whenever Debenhams get back to us.

Grindah: We've got our own club nights now - the Champagne Steam Rooms, so look out for them as well. Basically just keep your eye out.

Beats: We're all over the place.

Grindah: But in a good way.

People Just Do Nothing is on BBC Three from Sunday 20th July.

More People Just Do Nothing interviews