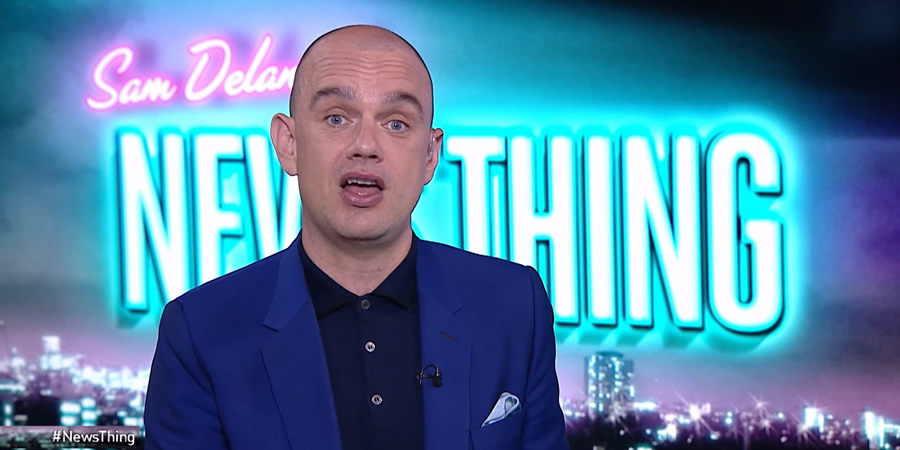 Two years ago RT gave me a commission to present a weekly satirical show. Satire sounded a bit too clever for what I had in mind, to be honest, but I agreed to have a damn good crack at it.

We've made one hundred episodes now and had the best fun doing so. The channel have never tried to censor any of the stupid and occasionally offensive stuff we'd said and done. Except for once when we got the comedy writer Andy Dawson to play a lager-swilling Princess Di broadcasting live from heaven. "There are some things the British public will not accept," I was told by the channel boss.

Other than that though, we've been allowed to get on with saying whatever we want about the idiots, charlatans and gangsters that occupy our public life. Most of the time we've just taken the piss out of them. From time to time we've got a bit passionate and serious about the issues that made us really angry, not least the Grenfell Tower disaster.

Along the way, we have made a few headlines by cajoling our array of high profile guests into ludicrous and undignified predicaments. Here are my ten favourite moments.

Nigel Farage has appeared on News Thing three times and been a cordial and easy going guest. So much so that by the third time I was worried we were going a bit too easy on him - something which didn't sit well for my status as a paid-up member of the liberal metropolitan elite.

So we concocted a stunt in which his aspirations for a knighthood would be fulfilled by a 6 year old girl with an inflatable sword, neatly undermining the absurdity of his infantile lust for establishment recognition. However, we added a surprise. After the sword had fallen and Nigel had been made an honorary Sir, our young actress piped up with the line we had given her: "my mummy says you hate foreigners".

Farage was completely taken aback by this sudden attack and the ensuing chaos was so much fun that the stunt went viral, dividing reaction between those who thought it was a hilarious staged dig at Farage, and those who saw it as some sort of bizarre Kremlin ceremony gone wrong.

Simon Danczuk gets distracted by a belly dancer

Suspended Labour MP Simon Danczuk had been the subject of one of our monologues before this, due to his proclivity for sending saucy texts to young constituents. However, his ex-wife, and regular panellist, Karen Danczuk reported to us that Simon actually enjoyed watching our caricature of him as Britain's foremost sext laureate. So we got him on the show for his right-to-reply.

Was he a sex-mad maniac or a hard-working local MP? The only way to find out was to ask him obscure questions about his constituency of Rochdale while attempting to distract him with a sexy belly dancer. And fair play to Simon - he kept his eyes glued on mine the entire time.

Of course, Kinnock was far too much the gentlemen to properly slag off a fellow Labour man, but I was able to coax out of him, through highly scientific means, that he finds Jeremy Corbyn's leadership almost exactly as good as Ed Miliband eating a sandwich.

Former Mayor of London and Nazi-factchecker Ken Livingstone is a friend of the show and has sat through several interviews, batting away my juvenile questions in his nonchalant, inimitable style. Actually it's not inimitable, because I do an amazing Ken Livingstone impression.

So when I handed him a microphone at the end of one show to join me in a duet of a Phil Collins classic for no particular reason, he took the whole thing in his stride as usual and droned out a beautifully monotone rendition of Easy Lover.

It was a welcome return to pop for the man behind Blur's hit album track Ernold Same, and fans will be glad to hear that it features on my upcoming compilation of News Thing duets "Delaney Does Soul" featuring Alexander O'Neal (with whom I performed his hit Criticize in Episode 85) and Alastair Campbell (with whom I performed a heartfelt rendition of New Labour anthem, Things Can Only Get Better).

Like most people, I consider that picture of ex-UKIP MEP Steven Woolfe lying on the floor after being (allegedly) sparked out by ex-commando UKIP MEP Mike Hookem to be one of the greatest photographs of the modern age.

But when Steven Woolfe, now an independent, came on the show I was concerned that he lacked the ability to properly defend himself. So I gave him a special training session in which I taught him how to use his body as a weapon, turn his opponent's strengths against them and punch a cake, for reasons I have now forgotten.

Since this episode, Steven Woolfe has not been hospitalised once, which I believe to be entirely due to my timely intervention.

I won't bore you with the details, but suffice to say that when News Thing mounted a tribute to the late, great David Bowie, we spent most of the time discussing the late, greater Cilla Black's fondness for eating oranges smeared in OXO.

It felt only fitting to finish our tribute episode with a round of Cillas, and I was delighted to see former deputy Prime Minister John Prescott attack his orange with an enthusiasm that even the legendary TV matchmaker would have found hard to equal.

I hear from Prescott's advisers that he now insists on starting every day with a Cilla, and has passed the habit on to Angela Eagle, John McDonnell and Lord Adonis.

Comedian Bobby Mair is a regular panellist and reporter for us. And when serial snitch Julian Assange got his internet cut off at the Ecuadorian Embassy, Bobby went right to the centre of the action to put things straight.

Unfortunately, he wasn't accorded the same access to Assange's secret lair as Pamela Anderson. It seems it's one rule for glamorous former Baywatch actors and quite another for mad shouty Canadian men with, let's be honest, underwhelming breasts.

So he was forced to shout the internet at Assange through a megaphone while CIA trucks drove laps around him to assess the threat level, in a stunt which made headlines all over the world and put Bobby on at least two different watchlists.

Welsh Tory Brexiteer David Davies is a friend of the show and relishes the chance to rile up liberal comedians with his unapologetically right wing views. So we decided to confront him with the ultimate snowflake lib-tard: Keith Le Klerk, head of North London think tank Forum Exchange.

In fact, Keith Le Klerk is an invention of character actor Alex Lowe, who also appears on the show as Jeremy Corbyn and Sid James. Keith's talk of gender fluidity and sexist pronouns completely befuddled David Davies, who left the studio assured in his belief that PC really had gone batshit mad.

We should probably tell him it was a joke.

When the Tories launched spectacularly unsuccessful grassroots movement 'Activate', we thought the time was right to look back on the last time they tried it.

The resulting video, a spoof campaign for a 1987 Tory fan club called 'Maggiez Matez' featuring actor Gareth Cooper, went totally viral. And we successfully convinced many people it was real through the ingenious method of telling them them that it was 'definitely real'.

Paul Nuttall gets roasted by a dancehall MC

Say what you like about UKIP members, but they have absolutely no qualms about coming on state-sponsored Russian television and having the pissed ripped out of them by a poncy liberal journalist. We're absolutely swimming in the bastards.

In the case of then-leader Paul Nuttall, we decided to disguise our criticisms of his party's far-right policies in the one language we knew he could never possibly understand. The language of ragga.

Dancehall MC Irah wrote and performed the intro, and has since gone one to deliver scathing reggae-rebukes of Ken Livingstone and Nigel Farage.