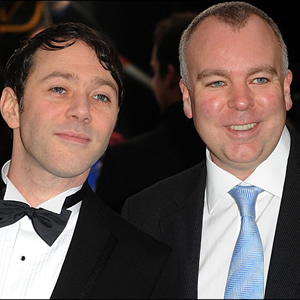 Reece Shearsmith and Steve Pemberton, the creators of Psychoville, have signed a deal with the BBC to make a new comedy horror show.

The duo, who found fame as part of The League of Gentlemen, are reportedly making a series for BBC Two called Happy Endings. The format is described as being comprised of six self-contained episodes, linked by the fact each is "funny and terrifying".

Trade publication Broadcast reports that Shearsmith and Pemberton have signed a two series deal with the BBC, although it is not yet known what the second show will be. Writing on Twitter, Shearsmith clarifies: "To be clear, the BBC have commissioned two series from Steve and I. They are two different things. Not two series of the same thing."

Happy Endings will be made in-house by the BBC. The corporation's Head of Comedy Mark Freeland admitted in an interview with the paper that the broadcaster was having to "broker more imaginative deals" to keep talent from migrating to the cash-rich Sky. The BBC ordering two series of Stewart Lee's Comedy Vehicle and the two series deal with Shearsmith & Pemberton were cited as examples of this.

He said: "We love Reece and Steve, why wouldn't we do their next two projects? If I was Sky, I would have gone after them. To know we've got their next two shows makes my job easier - that's guaranteed business in the right way. We hope to replicate it with other talent."

The commission of Happy Endings signals that Psychoville, the dark and twisted comedy created by Shearsmith & Pemberton, has indeed come to an end. The show ran for 14 episodes across two series and a special, but Freeland said it was "a very mutual decision" to bring the show to an end. The idea of characters or themes from Psychoville returning in Happy Endings has not been ruled out, however.

Happy Endings is expected to air in 2013. It should be noted that the programme name is still a working title and may change. Happy Endings was also the name of a musical series - again consisting of unrelated play-like episodes - on BBC Two in 1981, which starred Peter Skellern and featured a number of comic compositions.

Below is a clip of Shearsmith and Pemberton in action in Psychoville, with support from David Bamber and Sarah Solemani: