British Comedy Guide revealed in July that Gold's new sitcom Sandylands was to return for a second series, and now filming has started on the three new episodes.

Series 2 sees Sanjeev Bhaskar return as "the one-and-only Les Vegas" in the seaside-set sitcom, with Natalie Dew as his daughter Emily. 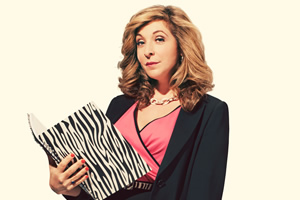 Writers Martin Collins and Alex Finch say: "We are so excited to be back in Sandylands and working with the brilliant team at UKTV. We can't wait for everyone to see what we've got in store for our incredible cast and are absolutely delighted to be welcoming some amazing new faces on a return trip to the beautiful British seaside."

Series 1 of Sandylands, which was broadcast in March 2020, closed with Les once again taking to the high seas in a pedalo, this time accompanied by Emily, who he was hoping would be doing most of the pedalling in a bid to escape the clutches of the vindictive and mysterious One Eyed Man (played by Hugh Bonneville).

The producers say: "After what feels like an eternity at sea, Series 2 sees our heroic but also law-breaking duo marooned on a beach that could be literally anywhere but turns out to actually still be in Sandylands.

"A relieved Les and Emily return home only to discover that Emily's estranged mother Donna Vegas, is back in town and standing, cocktail in hand, in Les's Egyptian themed lounge. With a hefty insurance pay-out on the horizon and yet another unreliable person roped in to keep their secret, only one question remains - will Emily ever escape the clutches of her bickering parents and her seaside hometown?"

Commissioner Pete Thornton says: "Sandylands is a special place for me, and I'm really pleased to finally be returning to it after the long winter months of lockdown. Series 1 introduced us to a clutch of highly original characters played by an extraordinarily talented cast, and I know the Gold audience will be looking forward to their further adventures, as imagined by two of our most original comic minds, Alex Finch and Martin Collins."

Channel boss Gerald Casey adds: "We're thrilled to see the return of this fresh and funny comedy on Gold. It's such a fantastic line-up and the characters are so expertly crafted by Collins and Finch. I can't wait to see more!"

Jo Sargent, exec producer for producers King Bert, comments: "We're delighted to be returning to sunny Sandylands for another season and to have Tracy-Ann Oberman joining our illustrious cast. Martin and Alex have outdone themselves with brilliantly funny scripts that will see Les's estranged 'widow' Donna returning home to stake her claim to the Les Vegas business empire and her daughter... in that order! Thank you to the team at UKTV and Gold, the perfect home for this show."

Series 2 of Sandylands is expected to be shown on Gold later this year.