The two-hour special is filmed on the set of their classic sketch show, which ran from 1987 until 2005.

Gold says: "The much-loved duo will discover and discuss all of the crucial and unforgettable female contributions to the pantheon of comic history across the globe. From the very first trailblazers, to the acts who inspired a young French and Saunders, all the way up to today's generation of publicly adored and critically lauded stars, French And Saunders: Funny Women promises to be a warm, affectionate and illuminating celebration of women in comedy, presented as only French and Saunders could."

Dawn French and Jennifer Saunders say: "Are women funny...? This is the thorny age-old question we have been chewing over since both of us were two years-old and to date we still have no definitive answer. So in this programme we explore fifty thousand or so irrefutable examples to see if we can draw any blatantly predetermined conclusions..."

Commissioner Helen Nightingale comments: "I've always been a huge fan of French and Saunders, and to be able to bring them back together on Gold to celebrate the funny women who inspire them is a dream come true."

Gold's Gerald Casey adds: "Gold viewers are absolutely passionate about comedy, so a show like this needs to have the right credentials. And who else on the planet is better placed to make it than two of our all-time comedy greats?"

Glen Middleham from producers Double Yellow Television says: "It's a total joy to listen to Dawn and Jennifer discuss their craft and also that of the very many funny women who've influenced them. It's an honour to make what will be a very exciting, engaging and laugh-out-loud programme with two comedy icons."

French And Saunders: Funny Women will air on Gold later this year. The channel is also working on the documentary Vicar of Dibley: Inside Out, focusing on the hit sitcom starring Dawn French. 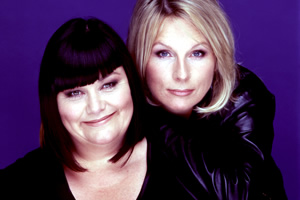