Sir Tony Robinson has revealed that he is in talks with Netflix to reboot 1990s kids TV classic Maid Marian And Her Merry Men.

The Blackadder star created the cult BBC comedy in 1989, also starring in it as the Sheriff of Nottingham. The sitcom quickly became a favourite amongst both children and adults when it debuted on BBC One, and retains cult status. In total it ran for four series, ending in 1994.

As reported in 2018, Robinson had been planning to bring the format back as a live stage show, however the idea has now been taken to Netflix.

Speaking on the Celebrity Catch Up podcast, he confirmed: "We were talking about the possibility of doing a West End musical of Maid Marian last year and the year before, but in a way Covid knocked it on the head and it wasn't going in the right direction anyway.

"But I'm now talking to Netflix about the possibility of some kind of revamp of Maid Marian in the future, which would be very exciting."

However, speaking to host Genevieve on Celebrity Catch Up, a new nostalgia-based show "celebrating much-loved music, film and TV of the 1980s-2000s", Robinson revealed if the reboot went ahead it would feature a new cast.

"I'd kind of like to start again," he said. "I would like to discover that voice of the television Marian from scratch. I've got some ideas which I'll keep absolutely under wraps. As soon as I told you some of the people we had in mind for the cast you'd get where I was going - but I'm not going to!"

Listen to Celebrity Catch Up 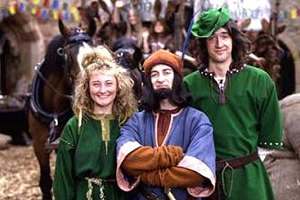