Filming is now underway on the sixth series of Friday Night Dinner.

In the new episodes, Martin buys a grotty old caravan - and starts living in it; Jackie almost has a heart attack when the boys both get 'females'; Jonny buys the world's most disgusting coat; Adam gaffer-tapes Jonny's phone to the ceiling; Aunty Val takes up sexting; Horrible Grandma wreaks havoc in the Goodman household - and Jim gets a brand new dog...

Since launching in 2011, Friday Night Dinner has gone on to become one of Channel 4's longest-running sitcoms. The show has been building an audience, with the last series - shown in May 2018 - averaging 1.9m viewers, a 19% rise on Channel 4's normal Friday night slot performance.

Kenton Allen from production company Big Talk says: "Friday Night Dinner has grown into a phenomenal hit for all involved and the huge demand for new episodes is rather humbling. We look forward to launching Series 6, alongside a fabulous range of merchandise which we're currently developing to launch alongside the next season. Wilson Dog Biscuits anyone?"

The new episodes have again been written by Robert Popper. He says: "I'm really looking forward to filming the people do the acting for the television."

Fiona McDermott, Channel 4's head of comedy, comments: "I'm still not over Wilson... but a 6th series will put a smile back on my face. We're delighted to be working with Robert, this amazing cast and all at Big Talk on a remarkable 6th series."

Friday Night Dinner Series 6 will be shown on Channel 4 in 2020. 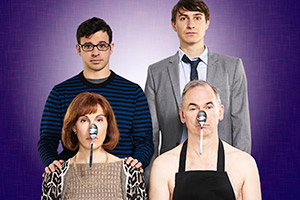