The series looks set to present comic animal clips from the internet as sporting attempts.

A report from trade publication Broadcast says the pair will provide "comedic analysis of bizarre and wonderful sporting events captured on camera", including "jumping cats and horses playing football".

Six half-hour episodes have been ordered from production company Spelthorne Community Television, and are expected to broadcast later this year.

ITV's entertainment commissioner Ben Kelly says: "It's a real pleasure to have John and Jess providing the comedic glue to this assortment of sports that don't look like sports, but totally are sports.

"If you've ever wanted to see the finals of the world's angriest goose competition or advanced canine gymnastics (regional heats) then Zone Of Champions is the place for you." 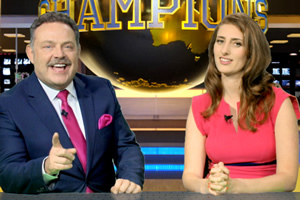