The Dark Room, a hit live comedy format hosted by comedian John Robertson, is to be turned into a new TV series.

Modelled on the concept of the text-based 'choose your own adventure' game books, the live format sees Robertson standing in front of a TV screen featuring a multimedia projection. He then asks the audience which of the four options on screen they'd like to take. The audience must attempt to escape the room by picking the right sequence of options, before the time runs out.

The format - which has gained five star reviews - has played at festivals around the world, and will return to the Edinburgh Fringe this August for a 7th consecutive year.

Robertson has previously explained the show as follows: "This is a cross between a comedy show, a game show and a pantomime. Remember those text-based adventure games; 'You come to a fork in the road, do you go left or right?' This is that... LIVE!"

The TV version of The Dark Room is now in development with new production company Hare And Tortoise, which is backed by FremantleMediaUK. They say they are giving the format "a high-tech power-up for the screen".

The below video explains the live format: 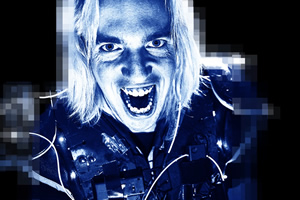