Classic sitcom Some Mothers Do 'Ave 'Em could be returning to TV with Joe Pasquale in the lead role of Frank Spencer.

The Express reports that the sitcom's creator Raymond Allen is working on new TV scripts.

The news follows the success of a stage version starring the comic, which is currently touring.

The sitcom classic originally ran on TV from 1973 to 1978 with Michael Crawford in the lead role as the accident-prone Frank, with Michele Dotrice as his long-suffering wife Betty. The stars briefly reprised their characters for a 2016 special for Sport Relief, which was warmly received by audiences and caused speculation that the stars could reunite for a new TV series following the Spencers 40 years on.

The new play, which has been touring the UK since 21st February 2018, was adapted by Guy Unsworth, with Pasquale in the lead role. It is due to tour until 30th June and is attracting rave reviews from audiences.

The comedian and actor, who the Express said is "encouraged by the response of TV execs", also told the newspaper how he ended up in the role.

"I was doing Spamalot in the West End, playing King Arthur, and I was boiling hot and sweating. My fan wasn't working so I rewired it and plugged it in and it blew up. The directors on the show, Guy and Chris Luscombe, both said at the same time, 'You are like a real-life Frank Spencer! Have you ever thought about playing Frank?' They then contacted Raymond and asked him if we could get the rights and he said, 'It all depends on who you have got to play Frank'. When they told him they were considering me he replied, 'Well, he is the only person who can!'"

No details on which television channel the project is aimed at has been revealed, but the original sitcom was a BBC production and they would be the most likely to be poised to revive the show.

The original series is available to buy on DVD.

Some Mothers Do 'Ave 'Em - The Complete Collection

Every episode from the television comedy series. Includes all three series and the three Christmas Specials.

Enjoy again the classic comedy series with the complete collection of every episode ever made plus the three 'specials'. All 22 episodes with 12 hours of classic comedy.

From hanging off his car over a cliff edge to roller skating down the high street behind a bus, accident-prone Frank just seems to find one harassment after another! 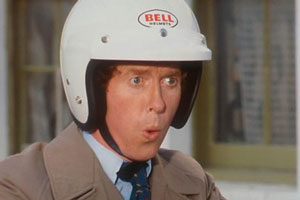 Some Mothers Do 'Ave 'Em