Another chance to see Frankie Boyle talking about Mock The Week slash fiction, hear about Dara O Brian's curious exercise regime and see the producer plaintively pleading with Dara through his earpiece. 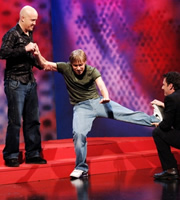