Will Ali ever be able to trust the two men in her life? Chris, who has been receiving mysterious texts in the middle of the night? Or Marco, who has agreed a deal with a new backer, testing Ali's creative integrity to the max? As for Davina, she is on a mission to close them down.
Preview clips 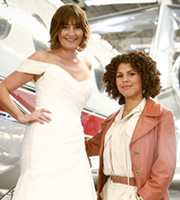 Things are hotting up with Ali and new boyfriend Chris, but Ali fears that she'll mess everything up by being mistrustful. A second date goes off without a hitch until she secretly reads a text message asking Chris to meet someone the following day. Ali makes an ill-judged decision to follow him and is totally thrown when she spies a young girl calling him daddy!

Chris is appalled by her antics and Ali fears she has totally blown her chances with him. After much soul-searching with best friend Alex, she realises she's the one that can't be trusted, not Chris.

Meanwhile, Ali's faith in Marco is dashed when she discovers they have no financial backing for their business. Well, they might have if Ali manages to impress powerhouse couple Caroline and Nick. But they insist on having a creative input in the form of a "synthetic fabric" that Ali has to use in her collection. Ali is furious, but Marco insists this is their only option if they want to have a business. At the same time, Davina is trying to sue Ali, so it looks as though Ali's business dreams are in tatters on all fronts...

Mimi and Ali spy on Chris.