Les Dawson: An Audience With That Never Was

Les Dawson: An Audience With That Never Was marks the 20th anniversary of Les Dawson's untimely death in June 1993. At that time, Les was just two weeks away from recording An Audience With Les Dawson, the latest in a distinguished line of legendary comedic talent to be honoured with an invitation to perform in front of an invited celebrity audience.

Les Dawson was following some of the giants of British and international comedy into the Audience With... spotlight, and would have become the latest name on a list that included Billy Connolly, Kenneth Williams, Dame Edna Everage, Mel Brooks, Dudley Moore, Jackie Mason, Bruce Forsyth and Peter Ustinov.

Now, twenty years later this special tribute tells the story of the television event that never was, revisit the original content planned for that show, and uniquely present it for a celebrity studio audience specially invited to enjoy the very best of Les Dawson.

Rain Media and Fresh One joined forces with Musion, the world's leaders in 3D holographic projection, to produce a "staggeringly realistic" image of Les Dawson performing in his distinctive style - just as he would have done on An Audience With Les Dawson. This was the first time a television special anywhere in the world used the technology as its centrepiece. 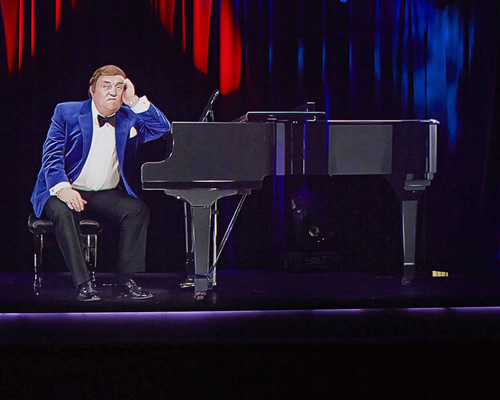 In addition to the performances by Les Dawson, a host of stars including Sir Bruce Forsyth, Cilla Black, Sir Terry Wogan and Ken Dodd recall their own memories of working with the late comedy legend.

The programme was produced with the full co-operation of Les's widow Tracy, who has granted exclusive access to the Dawson family personal archive including - for the first time on television - moving and emotional video recordings made by the star for his beloved baby daughter Charlotte, who was just eight months old when Les died.

The original producer of An Audience With Les Dawson in 1993 was Claudia Rosencrantz, who executive produced this special. Claudia said: "It was wonderful working with Les Dawson and devastating when he died two weeks before the recording. His death was not only a shocking loss for his family, but it was also a huge loss of a uniquely brilliant comedic voice. This show has always haunted me as the show that was so nearly made. So it's an honour to be making An Audience With That Never Was to mark the twentieth anniversary of his death. The first time I saw his hologram I had goosebumps. So it was very emotional, and very brave of Tracy and Charlotte Dawson."