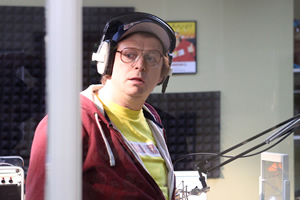 Ivan Brackenbury is a long-serving hospital radio DJ who has been volunteering at Brimlington Hospital for 23 years. Ivan would be willing to die for Hospital Radio and firmly believes the only reason Radio 1 DJs are more popular than him is because they have an FM licence. 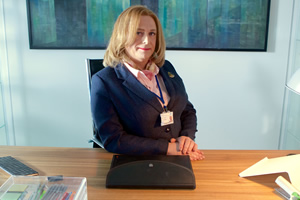 Susan Mitchell is the manager at Brimlington Hospital. She may be struggling with an all-time low approval rating, but Susan truly believes she is delivering the best for the hospital, whether it's with award events, video conferencing or PR stunts. You know, the important stuff in a hospital...

She can often forget the patients in her relentless determination to establish a successful legacy for herself... Susan hopes that before her time at Brimlington is done she will have a ward named after her - then the patients will be able to enter 'Susan Mitchell' knowing they'll soon get relief. 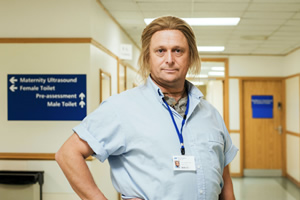 Ian D Montfort's job title is officially 'Porter', but Ian considers his main service at Brimlington Hospital as being an in-house spirit medium and psychic healer for the staff and patients.

Ian spends most of his time trying to avoid portering and instead, trying to find a suitable location to practise his... practice. The right space needs to be calm, be able to accept spiritual energy and also have enough 4G signal so he can fact-check what the spirits are saying about the people he is doing his readings on. 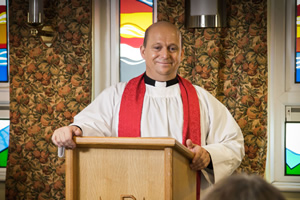 Kenny Mercer is the resident hospital chaplain at Brimlington. When Kenny was choosing his career, it was a tough decision between stand-up comedy and priesthood. He followed his calling to be a man of the cloth, but likes to keep his hand in stand-up where he can. Unfortunately this seems to mostly happen when he's dealing with bereaved families.

He is a proud Liverpudlian and a keen supporter of Liverpool FC. Kenny offers karaoke, live music and Sky Sports alongside his regular sermons at the chapel much to the dismay of his chapel assistant Mrs Leydon. 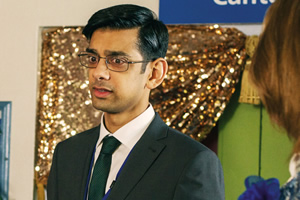 Sunny is Susan's right hand man. Dogsbody come bullet-taker, he is a Cambridge graduate who needs to survive his time here with Susan in order to move on to the next phase of his career; if Susan does badly, he does badly.

He is constantly run off his feet protecting them both from her 'unique approach' to management (Susan firmly believes that bunk beds are the obvious answer to the bed crisis). 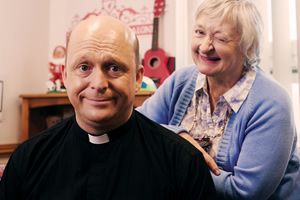 Mrs Leydon is Father Kenny's chapel assistant. She also acts as his trusty sidekick and biggest fan. She tries her best to keep him focused, but Kenny is easily distracted by gadgets and trying to make people laugh.

Kenny offers karaoke, live music and Sky Sports alongside his regular sermons at the chapel much to Mrs Leydon's dismay. And don't get her started on Reverend Timpkins, Kenny's rude ventriloquist doll who often co-hosts his sermons... 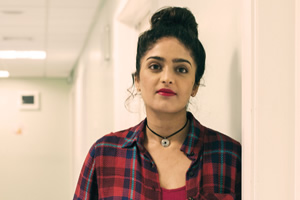 Ivan is often accompanied by his trainee producer Shaz, who brings him tea (five sugars in a Sports Direct mug!) and spends her time patiently waiting for a rare moment to actually get on air.