Mary goes under cover to find out who is making up complaints against her.
Preview clip 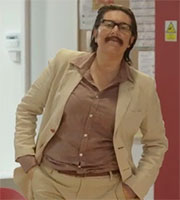 It is Drunk O'Clock and the staff are ready for the onslaught following pub kicking out time. The drooling mob descends and the team scramble to deal with the frenzy.

Mary has been called in to Head Office. There have been a number of complaints made against her from members of staff. Mary resolves to go under cover to find out who is making these claims against her.

Mary announces to the staff that she will be attending a christening for the next two days and that they will have a new employee arriving. Mary later turns up in disguise as a Spanish man named Carlos.

Joe has been covering up Amara's bad work. Amara is determined to prove that she can handle the job on her own but accidentally sets fire to her station. Derek fires Amara for her mistake.

Carlos does a little digging with Derek and he admits that it was him that made up all of the complaints in order to get Mary fired.

On Joe's instruction, Amara turns up to an abandoned restaurant. She has to step up and handle Drunk O'Clock on her own - when it comes to crunch time Amara saves the day.

Derek addresses the staff - he is going to fire them all. Mary/Carlos steps in and takes off her disguise. She confronts Derek regarding the complaints - he panics and covers, laughing it off as one big practical joke. Mary believes him.

Later that day Ed asks Joe if Amara is any closer to sleeping with him because he let her handle Drunk O'Clock all by herself - it's unlikely.

Does Fried have the key ingredients for a successful business?