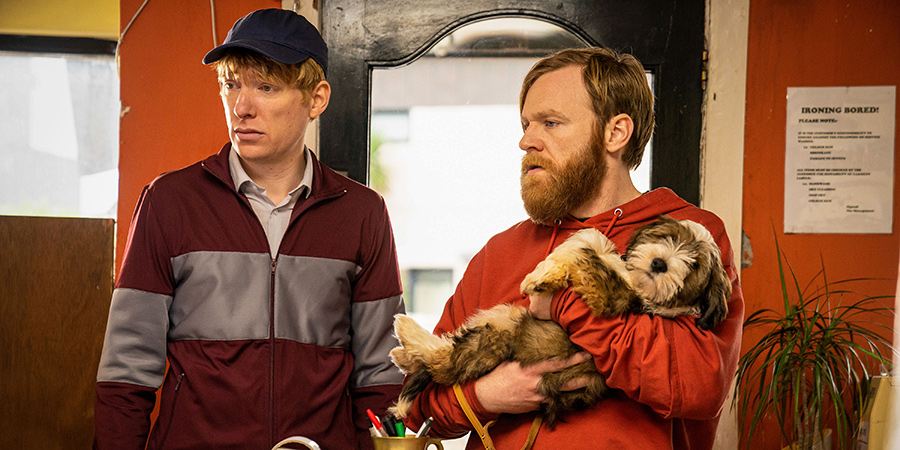 Brian Gleeson and Domhnall Gleeson talk about playing Frank and Doofus in Frank Of Ireland.

Can you sum Frank Of Ireland up in a few sentences?

Brian: Can I?! Probably not! Frank Of Ireland is a physical, slapstick comedy about an arrogant fantasist called Frank Maron who's in his thirties at home with his mother. He has a best friend called Doofus, who is too good for him, an ex-girlfriend he hasn't moved on from, and a mother who wants him to move out. That's what he's contending with over the six episodes....

How did the project come about?

Domhnall: Brian and I had worked together on a few things before, and wanted to do something new. Brian suggested we write something funny together to act in, which was a little bit scary. I'd written sketches with Michael Moloney over the years, who's a great writer, and the two of us had been looking to do something in longer form. So we all got together.
We morphed in and out of various versions of things over the years, finding what we wanted to explore, and by the time we met Sharon Horgan and Clelia Mountford at Merman we had a pilot written. They really helped us get it to the next level. But from myself and the boys initially talking about it to getting it on set, it took five years. It was a lot of work, but I'm happy we stuck with it! 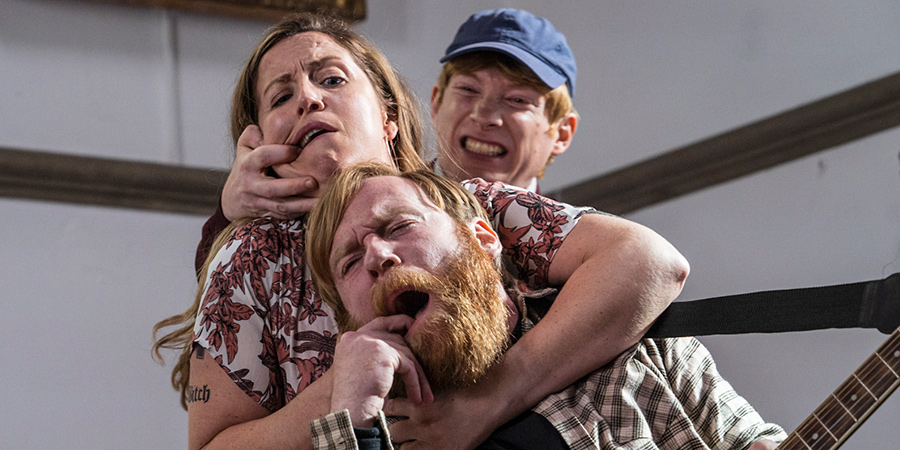 What happened when Clelia and Sharon came on board the project?

Brian: Domhnall knew Sharon a little bit, which was amazing because she very kindly read it and gave her thoughts. She helped to start the process...

Domhnall: It became real. Up until that point we'd done loads of work and got a pretty good pilot in shape. But we'd taken two and a half years to write a pilot and find a world we were happy with.

I knew Sharon a little bit, so when we were talking about sitcom structure I asked to send it to her for notes. We were lucky she liked it enough to forward it to Clelia and they decided to get involved. They gave us amazing notes on how to make it tighter and better as we went along. We were very lucky that they decided to work with us. And then they got it through the door at C4 and it became a reality.

What was it like working with your brother and one of your childhood best friends?

Domhnall: It was incredible. I've worked with Michael before writing sketches, but we'd never worked together on anything serious or longer. I've worked with Brian on films, shorts and plays, but anything longer had just been the two of us as actors. So we really didn't know how much work it was going to be at the start, but I wouldn't do it with anybody else.

We all brought something different to the table and had different ideas of what it could be. And what I'm most proud of is that all of those things are represented in the finished product. It feels like one thing - but all of our points of view and individual senses of humour are really in there. I can't believe we got away with being able to make it. It's amazing that it actually exists now, I'm really proud of it.

There's an amazing extended cast in Frank Of Ireland, and some brilliant women including Pom Boyd, Sarah Greene and Liz Fitzgibbon. What was it like working with them?

Domhnall: It was brilliant! It took us a long time to find the right flavour for each one of those characters. All the actors brought so much, something really different. We had known Sarah before, hadn't spent as much time with Pom. Liz was just it from the moment she said her first line. Their performances are wonderful and they were really lovely to work with too.
What I'm really happy with is they're not just there to hold Frank to task - as the series progresses, we find out that they're every bit as selfish and prone to massive life errors as Frank is. We really enjoyed that aspect of the characters as they grew, and the way Pom, Sarah and Liz embraced that was wonderful. So, I think we were just thrilled with what they brought to the roles.

Brian: They all embodied the characters for us in such a great way that they solved a few problems for us as well. We were thinking "what is the best approach for this character?" and then you read with someone and the actor's just solve that problem for you. So, we were very lucky to have them at the end. 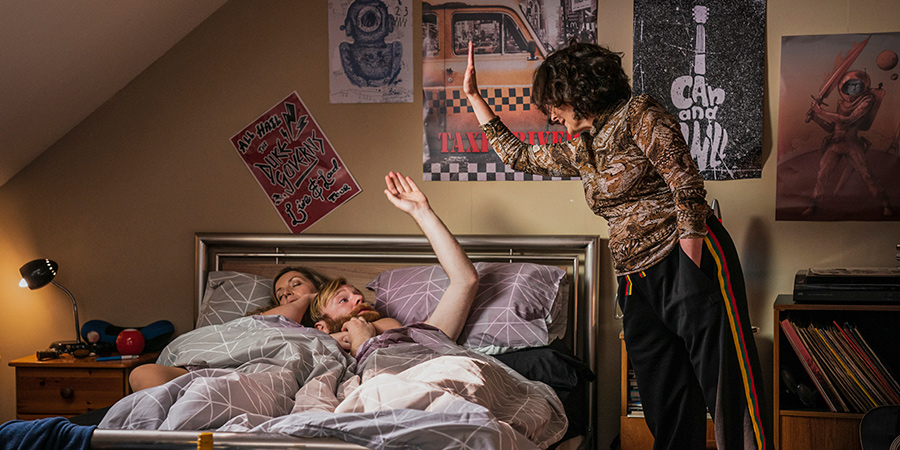 You dad, Brendan Gleeson, also makes a guest appearance in one episode. Did you make him audition?! What was he like to work with?

Brian: The character that our dad plays, we talked about very early on. But there was no place for it at that stage, as we hadn't figured out Frank yet.

But, as we got into the rest of the episodes and came back to it, we thought "Jesus, wouldn't it be fantastic if he could play this role? It'd be amazing." And he very kindly said yes. There were fun days for sure, particularly near the end of the shoot and during the reshoot.

There's a film pastiche element to the series that runs through each episode, how did you settle on those particular films?

Domhnall: As we went on, it became clear that it might be fun to have the film references but with a light touch to it - where we thread a movie into an episode without overwhelming it too much. The first idea was Taxi Driver, and that came out of one of the very first conversations the three of us had together. We thought it'd be funny to open on a man who can't drive, pretending he was Robert De Niro in Taxi Driver. I think the fact that he thinks Robert De Niro is a hero in Taxi Driver and not an anti-hero is telling as to the kind of character he is. But we all wanted to make sure it was threaded through kind of gently.

Brian: Sometimes we'd do calls in post-production [Covid-19 meant the edit was done virtually] and we'd be saying things that we said on set. Like, "I like you, Frank", which is a line that the character of Peter Brian (played by Tom Vaughan-Lawlor) says. The scenes in the spa in ep 3 and then the scenes with dad were brilliant also, he insisted on doing some of his own stunts.

Domhnall: Our shoot got split up two thirds of the way through due to the first lockdown. So, when we came back, I thought it would be more stressful but weirdly we were so happy and lucky to be back at work after having time off due to the pandemic, that it all felt brilliant.

One of the first days was the jacuzzi scene in which I was supposed to have just shaved my pubes. And there was something so weird looking around and seeing all this film crew with full PPE watching us sit in a jacuzzi, while Tom tried to flirt with a member of staff in the scene.

Doofus was supposed to have shaved his pubes, so I had to actually shave my pubes, go to a little place and make a bad job of it and put on my own razor-burn make up. It was the strangest thing, sitting with your brother in a jacuzzi on a day like that. On no other job would that happen. 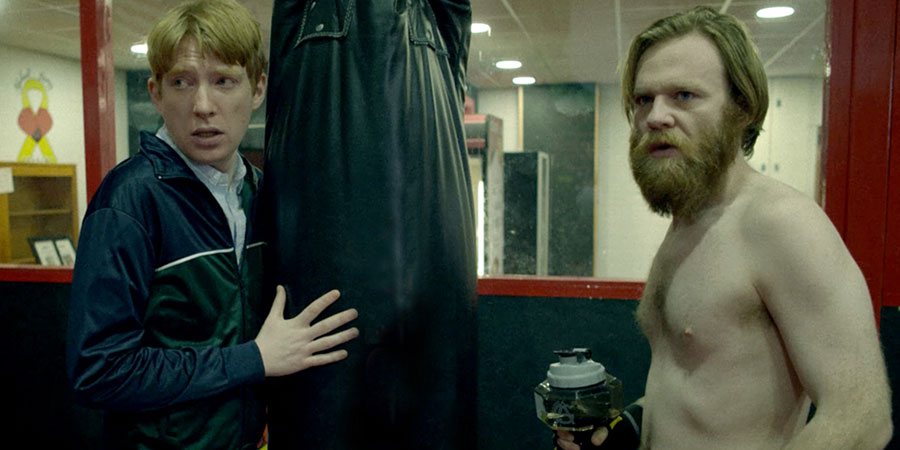 The series was filmed in Dublin and Belfast on either side of the pandemic. What was it like returning to Ireland to film?

Brian: We were very thankful going back to Belfast for the reshoots, as we realised how much we missed it. There were lots of rules and regulations you have to adhere to and it was quite strange, but it made me appreciate the project even more and getting to finish it. We were five weeks into a six week shoot when we shut ourselves down in March. But Channel 4 were fantastic in giving us the time and space to remount the production, so I was full of gratitude going back.

Domhnall: At a certain point we were asked about just shooting in Belfast, because there's lots of different exterior elements that we could use in place for Dublin. But Brian had been amazing about sticking to our guns saying, "no, we want it to really feel like Dublin". So, most of the exteriors were filmed in Dublin.

We got to shoot with an Irish and Northern Irish crew and nearly all Irish actors around us. We got to really feel like we were filming at home. And even for us with the family element of it, it was also nice having Brian in Dublin. Shooting at home, it was a treat.

There's been a lot written generally about Irish talent, and their ability to tackle silly, dark and brilliant comedy. Have you any thoughts as to why?

Domhnall: The reason I got into acting at all was that I read a Martin McDonagh script and it made me laugh more than anything I'd ever read or watched before. There's a dark sense of humour that I think of as particularly Irish. And I think bringing in more silliness, more slapstick elements into that with Frank was part of the fun for us. If you look at the actors in it, Sarah, Pom, Tom, Liz, our Dad... they brought their sense of humour and energy to it. They knew the humour of the show, and they took it further. I think that Irish sense of humour, whatever it is, is certainly all over Frank Of Ireland.

Brian: I think there's a kind of synthesis that happens. There's an Irish sensibility, but there are also programmes we grew up on like The Simpsons and programmes from the UK. So, there's a fusion of those two sensibilities you see a lot, like Derry Girls or even the sitcom format itself. But having the Irish music in the show alongside the Dumb & Dumber American element was fantastic to have. Having those different sensibilities in there was great and something new.