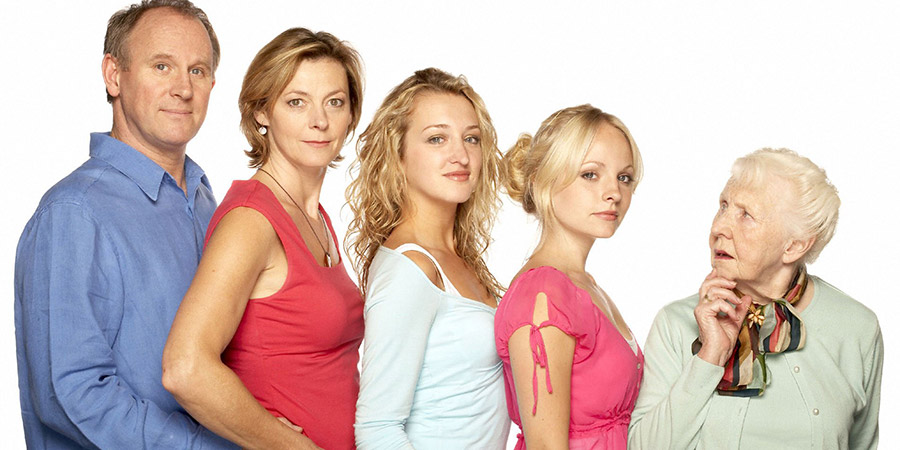 Fear, Stress And Anger is a BBC Two comedy series that explores what happens when you're past your sell-by date and are being shunted aside by the next generation.

For years, baby boomers have ruled the world. But now, much to their bewilderment, they find they are past their sell-by dates and are being shunted aside by the next generation. Their 20-something children won't leave home and their ancient parents won't shuffle off the stage. They're stuck in the middle - the sandwich generation. They had it all and they spent it all and now they're screaming as they become the new poor, with the added joys of bad backs, hormone imbalances and fading libidos.

Martin and Julie Chadwich met at Durham University, fell in love, got married and their lives have been enjoying an upwardly mobile curve for many years... until now that is as things are starting to fall apart. Martin is made redundant, Julie's civil service career stagnates, their two daughters won't leave home and Martin's senile mother is costing them a fortune in a nursing home.

Martin gets deeply anxious over plumbers, his fading libido and trying to finish his novel - which even he suspects is crap. Julie's deepening fear of finding that her life has been a waste of time sends her into equally obscure stress zones. And Martin's guilt over Gran means he keeps bringing her back from the nursing home, which drives Julie closer to the edge.

Julie and Martin try drugs, therapy and new jobs, but Martin's unerring ability to screw up absolutely everything, combined with Julie's rampant neuroses, just add to the fear, the stress and the anger. The two daughters also have their own problems. Not that they can get a word in, with their parents coming apart so noisily.

Michael Aitkens admits that his inspiration for this new comedy came from close to home. "When you reach a certain age, the phrase, 'What has my life come to?' starts preying on your mind. The baby boomers are supposed to be keeping up these wonderfully dynamic lifestyles they've been slaving away at for 20 years or more, yet they're haemorrhaging cash from both ends - only to get ousted by the next generation. For Fear, Stress And Anger I took this worst-case scenario into the world of advertising, where you do get this sudden burn-out.

"You are the dynamic, whizz-kid, flavour of the month for a few years, and then there's some other younger, fresher, better little b*****d coming up behind you and you suddenly become a 'consultant' - which everybody knows means you've pretty much been given the elbow. So I threw all these things into the air and put them together.

"You may plan a perfect life when you set out, and have these idealistic ambitions where you think, 'I'll reach that and then I'll be in the House of Lords and then a European Commissioner, retire in great glory and die happily at the age of 93', but it never works out that way."

Michael adds: "The series is also about friends, the people you've known since you were in your twenties, but you've nothing much left in common and you don't really know why you keep up with them. But you know each other inside out and have so much shared experience that you don't have to make too much effort with them. You certainly don't try and impress each other anymore. You just grunt and talk about socks and things that irritate you. You abandon intellectualism for comfort, plonk and bit of a daft laugh."