After discovering grandfather William was on the GB team in the cash-poor 1948 Olympics, Tom hears about his and Victoria's athletic feats from a close friend she bequeathed her flat to.
Preview clip 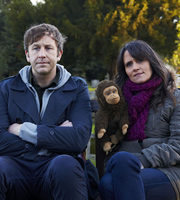 Bea and Monk audition to perform at a children's birthday, while Tom starts digging deeper into the life of his grandfather, William, who he suspects might have competed in the 1948 London "Austerity Games", a far cry from those of 2012. After learning more about the games from Mr. Pfister, Tom visits his great-aunt Victoria's friend, Mildred.

Mildred is able to shed some light on William's former athletic prowess and on why Victoria left Tom the chest of family curios.

With Keith's help, Tom and Pete are able to find the gym where Tom's grandfather William trained for the Games. At the gym, they meet some old-timers who knew William. And Pete bravely accepts a challenge from a much younger timer.

Bea and Monk perform their first professional gig at a wedding reception.

Tom and Mr Pfister's daughter, Lucy, swaps stories of heartbreak. Tom makes it a little too clear that he and his ex are no longer friends...