Tom Chadwick and his sister Bea find out from their father that a great-aunt, Victoria, has died. An old picture in the box of things that she's left for Tom sends him on a search, accompanied by his pal Pete, to discover the identity of the man in the photograph.
Preview clip 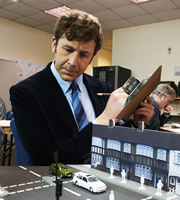 Unemployed and unattached, Tom Chadwick is surprised when he's bequeathed an old chest of curios by his great-aunt Victoria, who he and his sister Bea don't remember ever meeting.

He finds an old black-and-white photo in the chest that his father Keith believes is Tom's great-grandfather, Harry. With the help of his avuncular neighbour, Mr. Pfister, and his old school friend, Pete, Tom tracks down a rather unusual expert in the field of antique photos called Neville St. Aubrey, who discovers some very intriguing and revealing information about Tom's ancestor.

Meanwhile, Pete tries to get Tom's love life back on track by setting him up with a "model pretty" date. He's just not sure what kind of model.

Tom goes on a date with Ellie, who shares her views on dinosaurs.