Tom learns that his great-grandfather, Harry Chadwick, was an actor and visits Hove, where he performed. He and Pete decide to run a kind of race in honour of Harry's famous comic act.
Preview clip 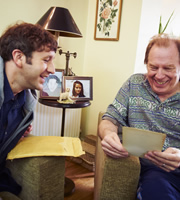 When Mr. Pfister discovers an unforeseen aspect of Tom's great-grandfather Harry's life, it leads Tom and Pete to the south coast of England, where Harry died many years before.

They meet an impossibly old woman, who still lives next door to the house Harry lived in and remembers him from when she was a child.

Their investigation takes them to a local regional theatre, where he and Pete learn more than they ever wanted to know about Harry's life and loves from the two very friendly gentlemen who run the theatre.

It also results in Tom and Pete entering a very unique and interesting competition, but not before Pete has set Tom up on another extraordinary date.

Nigel Robson-Jones explains the history behind the pantomime horse race, and why he once banned a camel from taking part.