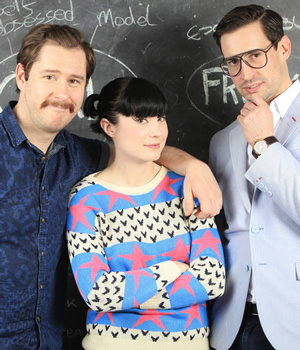 CTRL Freaks, currently airing on London Live, sees three comedians hijack the social media lives of two players, setting them insane challenges which they must pull off without revealing their lives have been hacked.

The comics involved in the show are Jacob Edwards, Dave Gibson and Bec Hill. Here the trio talk to BCG about the format...

Hi guys. Could we start by asking you to introduce yourself in five choice words?

Bec: I'm the Bjork of Comedy.

Bec: Your boyfriend proposed during your show at the Edinburgh Fringe last August (story). How are plans progressing?

That proposal gave me a good understanding of how it feels to be on the receiving end of a crazy, unbelievable surprise, which certainly helped influence some of my suggestions for our CTRL Freaks challenges. In terms of wedding plans, I'm not allowing a date to be set until I've proposed to Gavin in return. I want to get him back. Nothing says "I love you" like revenge.

Jacob: Viewers may recognise you as Roger Showbusiness from Live At The Electric. What was it like filming that series?

Live At The Electric was fantastic, but nerve-wracking as I was performing stand-up in character as part big studio record. The pleasure of CTRL Freaks is that it was very low risk for us; we could just abuse the contestants from the safe distance of our comfortable studio. Perhaps while enjoying a coffee and a biscuit or two. Perfect. 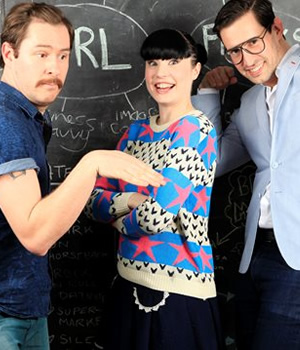 Dave: Would you shave your trademark tash off for a reverse 'movember'?

The moustache is part of my essence and forms part of my identity. It is as much who I am as the feelings that run through my mind. That being said, I'd shave it off £15 hard cash.

So what attracted you to take part in Ctrl Freaks?

Dave: I was originally reluctant to take part in CTRL Freaks as I had reservations about how people would react to having their Social Media intruded upon.... But then someone offered me £15 hard cash.

Bec: I've always been tempted to post as my friends when they leave their Facebook logged in near me, but I'm always worried I'll upset them. In this show the contestants are actively asking us to hack them! I love when you get permission to be naughty. It's like when your friend's parents let you have a Bacardi Breezer even though you're underage. :-O

Jacob: For me it was the money. Definitely the money. I mean, wow. Just wow. They offered me more money to host CTRL Freaks than I think I'd ever seen in real life, paid in cash. Then I worked it out, if I divided the total payment over all the hours we worked, then I was actually earning just above the minimum wage. But we did get free coffee, so it was still a pretty sweet deal.

Ha ha. Isn't it a bit un-fair of you three to ruin the social media profiles of the contestants, without letting them have control of your accounts in return?

Bec: Yes. Ha ha! And yet they still signed up for it!

Dave: In the wise words of Tim Berners-Lee: "All is fair in love and Facebook Updates"

Jacob: No one asks Simon Cowell to sing on X-Factor, do they? The same goes for CTRL Freaks - our job as hosts is to dole out the punishment, and the contestants are there to take it. Everyone knows where they stand. If we started handing over control to the contestants, they'd be chaos. And editing process would become both confusing and tiresome. 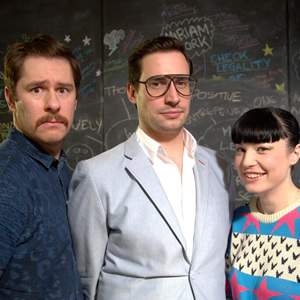 What was it like to spend hours and hours in a small room together?

Jacob: To be honest, at times it all went a bit Lord of the Flies. The social norms we take for granted were eroded over the hours and days, there were things that went on in that room that will always remain in that room. At one stage Dave Gibson tried to have sex with the wall, and Bec Hill attempted to eat the production runner. When things got really bad, I even took my suit jacket off. Utterly disgraceful.

Dave: The first thing that was immediately obvious was the terrible smell. But once they asked me to exercise more restraint in that particular area it became much more pleasant. The second thing that I noticed was that while myself and Bec took care of our own appearance, Jacob had a large team of people responsible for hair, make-up, finger-nail cuticles etc... He would often turn up late after pulling an all nighter, stinking of booze, shouting at his team, but by the time the camera's rolled he was a beaming delight. What a professional.

Bec: The room was hot. Really hot. And not in a sexy way. We had these massive lights on us the whole time and I made the mistake of wearing a woollen jumper as my outfit, which I severely regretted by the end of it. Luckily the NERD TV production crew were awesome and lovely and made the whole experience really enjoyable. Plus Dave and Jacob are good craic.

You really take the contestants out of their comfort zones... everyone seems really game, but was there anything anyone refused to do?

Jacob: One contestant refused to eat spicy chicken wings... Seriously, that was it. We entered him into a competitive eating competition and he was rubbish. Considering the kinds of things we challenged contestants to do over the series - get naked in public, insult celebrities, perform stand-up with no warning - it seemed weird to draw the line at spicy chicken wings. Each to their own, I suppose.

Bec: There were a few challenges where the contestants didn't really try - but it's funny watching them squirm. 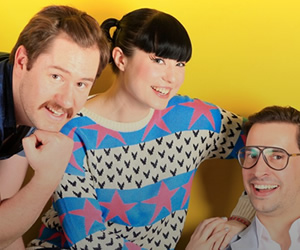 In hindsight, is there anything you regret getting a contestant to do?

Dave: I regret NOTHING. My favourite was watching a contestant trying to sell dog's milk to a London Café owner.

Bec: One episode involves a heckler at a comedy club. None of us enjoyed watching that. I think it was just too close to home. It was possibly more painful for us than any of the people actually involved, though.

Jacob: It was actually hard to gauge how far to push each contestant, because we only knew them superficially through their Facebook and Twitter profiles. So, just to make sure we didn't go too easy on them, we made sure all the tasks were incredibly tough - just to cover our bases. We felt we owed it to the viewing public to go in hard, and try to utterly destroy people who applied to be on the show. You're welcome.

Who was your favourite contestant?

Jacob: My favourite contestant was called Winston. Without any notice, we got him to go to a life drawing class and pose naked for the assembled art students. Not only did he do it, but Winston also added his own twist... He held a muscle pose throughout the entire class. Not in a comedy way, but with a totally straight face. Quite an eyeful.

Dave: I didn't have a specific favourite contestant, but I very much enjoyed the moment when - and this happened with EVERY episode - the contestant realised that what they signed up for was WAY more extreme than they envisaged.

You conduct all your business from the control room... have you since met any of those whose lives you 'ruined'?

Bec: No! We met their friends, obviously, when we asked them to be "insiders", but I think only Dave and Jacob had actual contact with some of the contestants. One of the contestants started following me on Twitter, so hopefully he's not too angry at us! 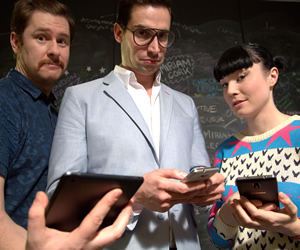 Jacob: No, I've not actually met any of the contestants... in the same way that Roman Emperors never actually mixed with the gladiators who fought and often died for them. To me the contestants were puppets, there for my petty amusement until I tired of them, whereupon they were disposed of. Forever. Does that make me a bad person?

Dave: I think the fact that the contestants signed up on their own free will is JUST enough to get the CTRL Freaks off the hook, but only just.

If you could take control of any other comedian's social media profile and get them to do your bidding, who would you pick?

Dave: I would take control of Stephen Fry's Twitter account and give it a bit of a makeover. I reckon if he tweeted some more he could have quite a big Twitter following. Watch this space.

Bec: I'd like to control Jim Davidson and make him a campaigner for women's rights.

Jacob: I'd take control of Bec's social media profile. I'd then task her with ruining the life of Dave. So I'd control the other CTRL Freaks and my rise to the utter domination of all prank-based television on London Live would be complete.

Ha ha. Thanks for your time Bec, Dave and Jacob. What's next up for you?

Bec: I'm doing loads of previews in the lead-up to the Edinburgh Fringe. Come and say hello! My dates are under the "Gigs & Shows" section of my website: www.bechillcomedian.com / @bechillcomedian

Jacob: I'm writing a new musical theatre show where each of the characters is a cat (actually a human performer dressed as a cat, obviously). Feels pretty original, so hopeful of it being picked up for a West End run. I'm also writing one show based on the French Revolution, and another one where all the performers roller skates throughout, although these ideas are obviously more far out. @JacobEdwards_

Dave: I'm probably going to have a poo once this interview is over. After that, no big plans. Probably another poo at around 6pm. @MrDaveGibson