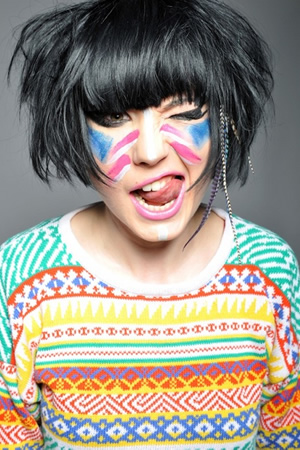 Yesterday Bec Hill (pictured) got a heckle she wasn't expecting... a marriage proposal.

The UK-based Australian stand-up, who is currently at the Edinburgh Fringe, was on stage performing her show Bec by Popular Demand when she received the special question from an audience member. That audience member was Hill's boyfriend, Gavin, rather than a random comedy fan - and the good news is she said 'yes'.

Bec explained to us over the phone how it all happened: "Four fifths of the way through my show I ask the audience whether anybody has a backup plan for if they get mugged... and yesterday I got an un-expected answer back."

Bec told us "At first, when the voice came from the back of the room, I just assumed it was a psycho Twitter follower or something like that, ha ha, but then Gavin emerged and I was really confused."

Hill had an inkling that Gavin might propose one day, but she had no clue he planned to do it at the festival this year. "It was completely unexpected. He had returned to London, so I had no idea he was back in Edinburgh and was hiding at the back of the gig."

She confirms: "I said 'yes' - well, I cried in happiness and nodded my head!"

As they say in showbiz, the show must go on though. "Gavin wouldn't let me have the ring until I'd finished the gig so I performed the last bit of the show with tears running down my cheeks."

She jokingly adds: "I was incredibly shocked, but also a bit annoyed that his answer wasn't actually a valid response to my question about mugging."

Bec and Gavin first met at the Melbourne Comedy Festival in 2008, where Scottish-born Gavin was working front of house. On returning to the UK, the couple have been involved with The Gilded Balloon, with Bec by Popular Demand scheduled at the venue at 4pm each day until 25th.

After the show the duo headed to the venue's Loft Bar where fellow patrons bought them champagne to toast the good news. The celebrations continued all night, with Hill admitting "we got very drunk".

The couple are currently thinking about holding the marriage ceremony in 2015. Bec explains: "I'm a big fan of the Back To The Future films and 2015 is the year they travel to in the second film."