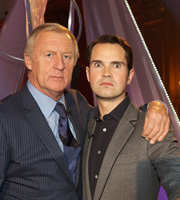 Taking a break from his day job of making millionaires and entertaining the British public over the airwaves, Chris Tarrant steps up to the plate to face the harsh taunts of his fellow celebrities and former colleagues. Nothing is left to chance, but Tarrant puts a brave face on proceedings as his life and career are both relentlessly and meticulously picked apart.