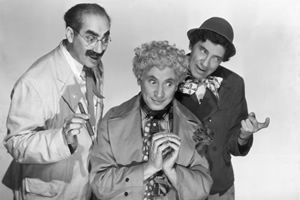 Sons of Jewish immigrants, the brother's distinctive slapstick personas were a hit on Broadway, with Groucho converting his stage persona to a highly successful film and TV career and remains one of the most quotable comedians to this day. As to whether Groucho would want to be held in such esteemed company as the other comedy legends, well, he did famously say "I refuse to join any club that would have me for a member."