This week, Barry Cryer takes a look at the life an career of one of the most influential stand-up comics of all time, Richard Pryor, who collaborated with Gene Wilder in four films including Stir Crazy and Silver Streak. 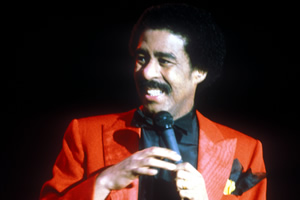 Pryor started his career in New York City clubs, performing alongside Bob Dylan, Woody Allen and Nina Simone. He worked past his initial bouts of performance anxiety to find his niche as a counterpart to the safe, middle-brow comedy that was utilised by artists like Bill Cosby at the time, and instead take an edgier approach and work profanity into his act.

His success saw him break through into television and film, co-writing Blazing Saddles with Mel Brooks and partnering with Gene Wilder in a range of popular films including 1980's Stir Crazy.